A fast-talking fox is framed for a crime he didn’t commit in Walt Disney Animation Studios’ “Zootopia” (working title)—in theaters in 2016. ©2013 Disney. All Rights Reserved.

Hello again my pretties, Disney never stops! The Walt Disney Animation Studio has created another movie that families can all enjoy together. Just to keep up wanting more, they have released a teaser trailer for the funny, cute, and animated Zootopia. Zootopia really works at the imagination, asking the question “What if humans never existed?”. Okay, it's not that serious, but it's so much fun to think about a world run by cute and cuddly animals! What's funny about this movie is that the animals are living their lives just like humans do –  think New York City, shirts, ties, suitcases, friends, and enemies. What a funny concept! In case  you were wondering, “What does the fox say!?” Well, Zootopia will answer that question! hehehe.

Okay, so obviously you want to see it now, right? Well, you will have to wait because this adorable movie doesn't release until next year!

The modern mammal metropolis of Zootopia is a city like no other. Comprised of habitat neighborhoods like ritzy Sahara Square and frigid Tundratown, it’s a melting pot where animals from every environment live together—a place where no matter what you are, from the biggest elephant to the smallest shrew, you can be anything. But when optimistic Officer Judy Hopps (voice of Ginnifer Goodwin) arrives, she discovers that being the first bunny on a police force of big, tough animals isn’t so easy. Determined to prove herself, she jumps at the opportunity to crack a case, even if it means partnering with a fast-talking, scam-artist fox, Nick Wilde (voice of Jason Bateman), to solve the mystery. Walt Disney Animation Studios’ “Zootopia,” a comedy-adventure directed by Byron Howard (“Tangled,” “Bolt”) and Rich Moore (“Wreck-It Ralph,” “The Simpsons”) and co-directed by Jared Bush (“Penn Zero: Part-Time Hero”), opens in theaters on March 4, 2016. 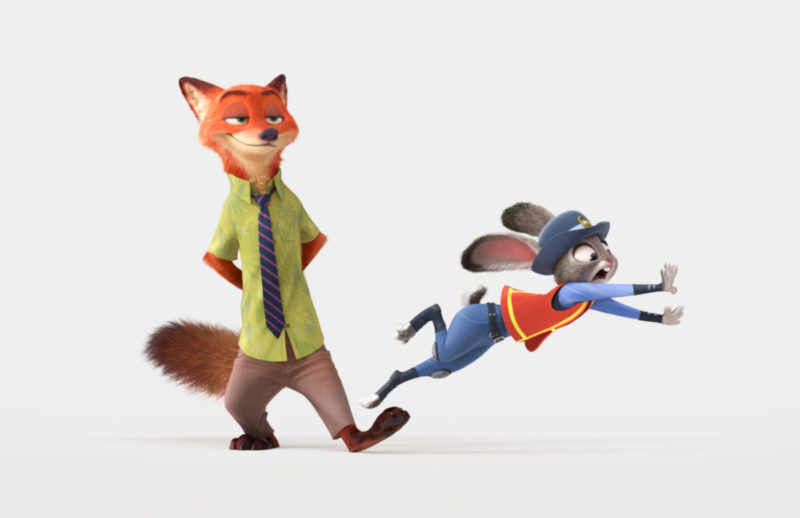 ZOOTOPIA – Pictured (L-R): Nick Wilde, Judy Hopps. “It's a nod to the great Disney animated animal films we all grew up with, but with a funny, contemporary twist,” said director Rich Moore (“Wreck-It Ralph,” “The Simpsons”). “Our artists and animators did tons of research to integrate true animal behaviors into each of our characters. The world of Zootopia is fantastic, infused with international flavor that will be relatable to everyone.” ©2015 Disney. All Rights Reserved.