We were advised before Donnie Yen interviewed the room, that he was kind of a big deal. He's had many accomplishments in his lifetime and is a very big superstar in other countries. He's known for doing his own stunts because of his incredible Martial Arts skills. He didn't walk into the room like a superstar, though. In fact, he seemed a little surprised to see a room full of women clapping for him. 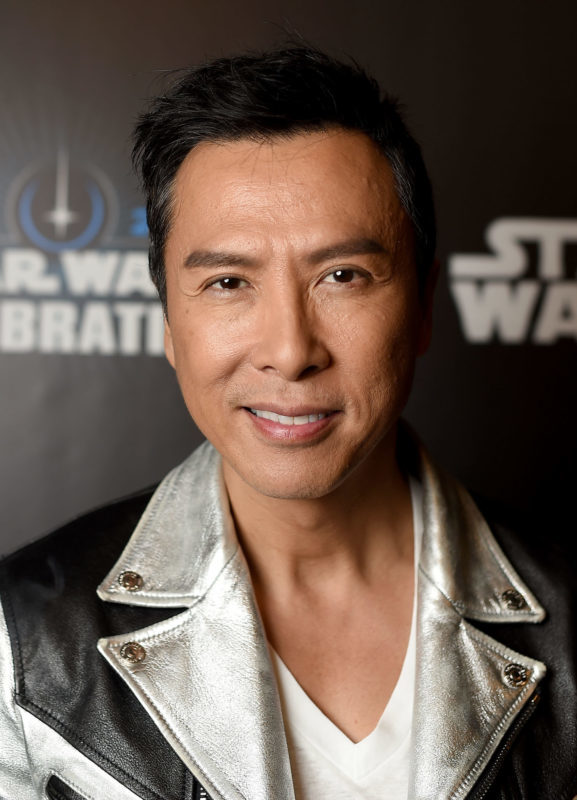 I think we were all surprised to see such a clean-cut gentlemen after watching a few minutes of him as a blind fighter in the special Rogue One footage that we watched the evening before. Nonetheless, we were excited to find out about this new Star Wars character and likewise, Donnie Yen was ready to give us the run down.

Chirrut, he's blind but spiritual. He's the spiritual center of the team. He's the Force believer. He preaches this he's got a little bit of a sense of humor. Yeah, and he beats up all the Stormtroopers.

Rumors were swirling that it was Donnie Yen's idea for Chirrut to be blind. Since this is a huge part of what makes Chirrut so intriguing, we had to know more about the process of adding a blind character to Rogue One: A Star Wars Story. “So in the beginning when I was discussing about my character with Gareth and I just felt it would be so much cooler to make him less of a cliché character, like, warrior monk, you know.“ 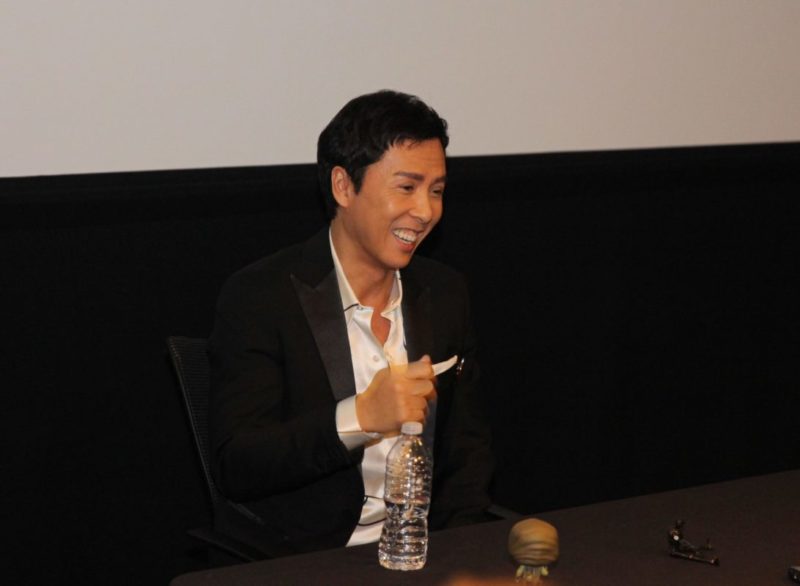 Donnie Yen didn't want to “take all the credit” and wants everyone to view it was a “collaboration” and “contribution,” but let's face it. It was completely Donnie Yen's idea and the character development from that point forward revolved around this disabled Star Wars character.

He mentioned to Gareth: “How about give him a little bit of vulnerability, you know, like a [disability”. How about being blind? And a little bit sense of humor? That was always been my persistence of keeping him grounded, having that sense of humor so the audience can relate to him a lot more. So, I suggested it and he's cool with it and Disney loved it and here we are!” 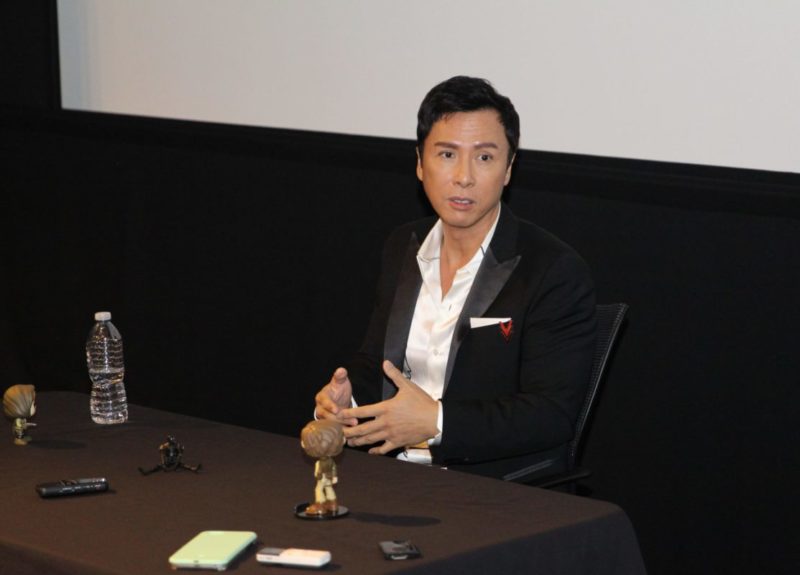 I personally think the idea was absolutely genius. Not only is it interesting to see on screen, but it makes a statement that a disability doesn't have to stop you from being a powerful individual. It's was also a testament to the skill that Donnie Yen has.

I wanted to be perceived as a good actor and striving to be a better actor each time. I never played a blind person before. That was another reason why I wanted to do something completely different, challenging.

Okay, Donnie Yen's vision is totally fine in real life… except for when he was on the set of Rogue One. He wore contact lenses for his role as Chirrut and they irritated his eyes so much that he honestly couldn't see what he was doing. This made acting “very difficult“, but more realistic on camera. I don't think we will ever look at his character the same way, knowing what we know now. 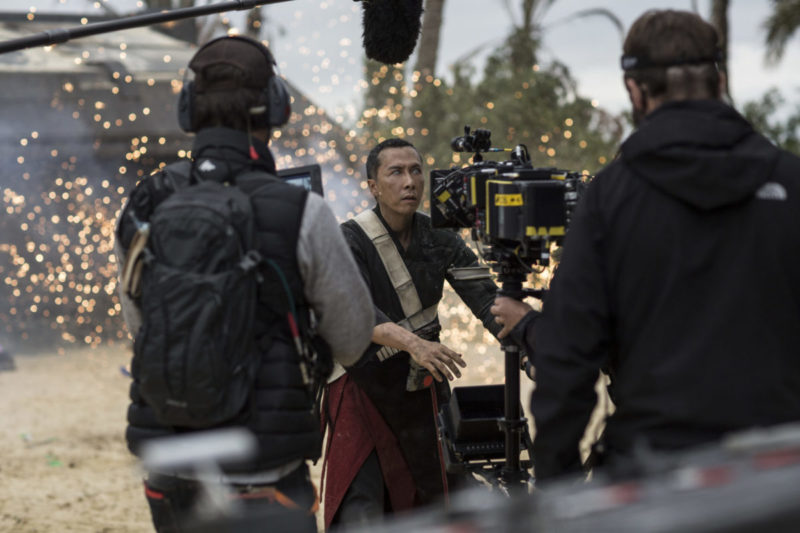 Donnie Yen describes the struggle of working with contacts in his eyes. “[I couldn't] really see. Everything was blurry. With technology today, they still were not able to manage to make blue pair of contact lenses [with] that specific look and give the full clarity for my sight. So I was having difficulty measuring the distance.”

But more difficult was [that] I couldn't look at my fellow actors in their eyes and I couldn't get to all reactions. When I'm talking I have to look at a point. And that was very frustrating because I didn't wanna look without the complexity of each line and the emotion.

Major props to him for making it work and for challenging himself, especially without having “full control” as an actor. It must be very difficult to be such an experienced actor, who lost a bit of control. However, Donnie Yen definitely feels like these challenges helped him to better portray the blind character.

He has to use his heart to feel it and that put my character even closer to the force. He's the spiritual center and he practiced the Force. But being blind, he has to feel the force. 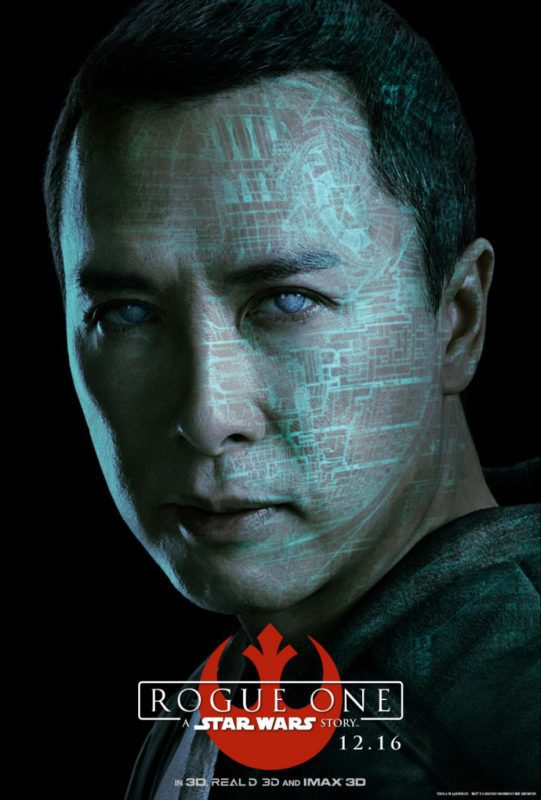 As I mentioned before, Donnie Yen is kind of a big deal. He is mainly know for his martial arts skills. Fans flock to him because he's physically very capable of just about anything. You can definitely see his skills shine through in his role as Chirrut in Rogue One. Does that mean Donnie Yen only takes on roles where he can show off his skills? Not necessarily. Mr. Yen understands that he has “straight action fans and Donnie Yen fans”. Which basically means that part of his fan base will appreciate any role that he takes on. I mean, 70 movies… obviously, he can take on just about anything. “I just want to take on challenges as an actor.” We can absolutely respect him for pushing himself to the limit!

We've heard about how grueling the training process was for Rogue One was. Being that Donnie Yen is an expert in the action portion of his films, was it as difficult for him? Not so much. It's his craft, so he just jumps into his role and does what he always does! 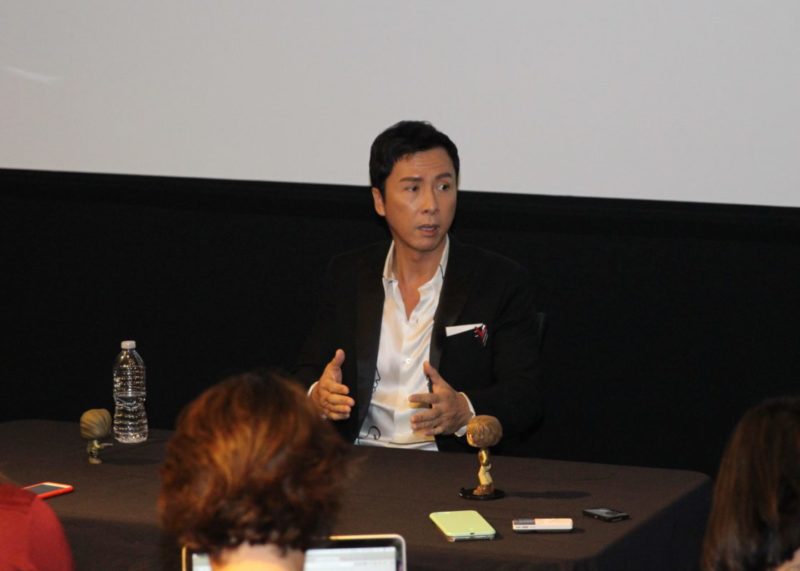 The secrecy of the film

When it was first announced that Donnie Yen would be in Rogue One: A Star Wars story, his actual role was to be kept top secret. Could you imagine telling the world that you're going to be part of the Star Wars saga, but not telling them anything else? You can't tell them the story line. You can't even reveal what role you'll be playing. Being the martial arts master that he is, fans speculated that he was going to be Jedi.

It's funny when my fans found out that I was gonna be in this movie, everybody thought I'm gonna be a Jedi and have a lightsaber and go against Darth Vader. But it eats me up. I couldn't really say anything/ I couldn't tell anyone that there would be no Jedi in the movie. 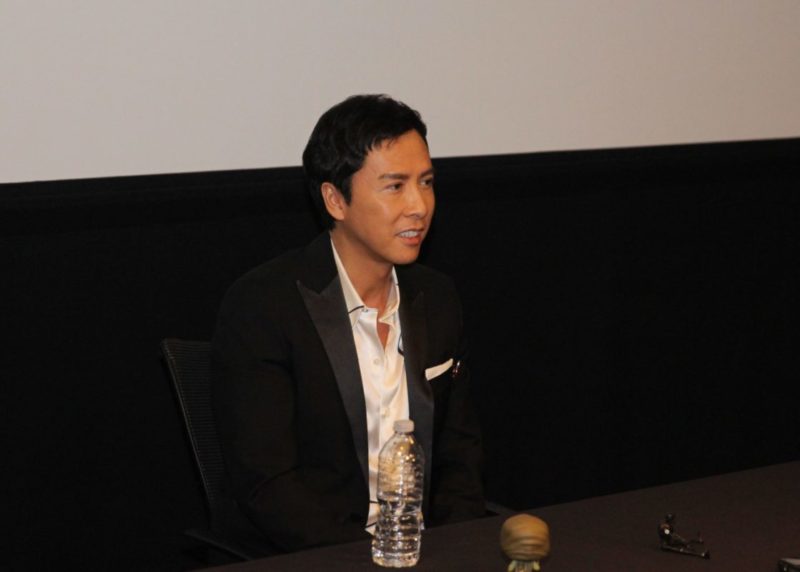 Accepting the role as Chirrut

The interview ended with Donnie Yen saying that he wasn't automatically onboard with accepting the role in Rogue One: A Star Wars Story. Yes, we were all just as shocked as you are. However, his reasoning was respectable and relatable. “I didn't wanted to leave my family, my kids and be in London for five months. I just got off from another movie and I live in Hong Kong.” He didn't accept the role until he asked his children and without hesitation said that he should be in Star Wars. Then, we he could tell everyone. They were so excited! He realized, “I'm making history here.” 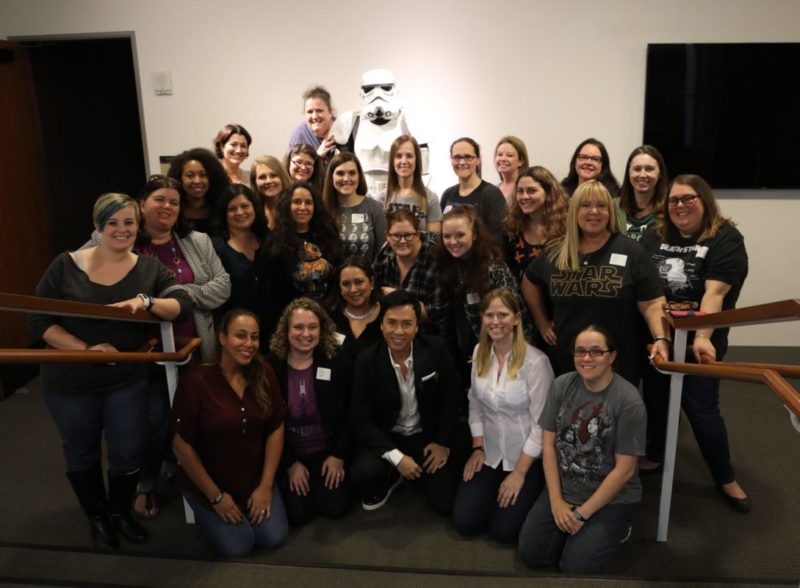 And that was that. He stepped outside of the room to take a group photo with all of his. Being his energetic self, he jumped right onto the floor to take a photo with everyone.