It's Force Friday people! Fans all over are going crazy to get the best deals on Star Wars merchandise today. Geeks everywhere are dressing up and having a blast to celebrate this big day! What are you doing today? Did you pick up any goodies? Are you a mega fan?

More than 3,000 retail locations in the U.S. open at midnight to celebrate new ‘Star Wars: The Force Awakens’ products

Glendale, Calif.  (September 4, 2015) – Today, merchandise inspired by the highly anticipated new movie Star Wars: The Force Awakens launched at retailers around the globe as ‘Force Friday’ officially got underway. Hot off the heels of the 18+ hour global live unboxing event on YouTube where highlights of the new product range were officially unveiled, the celebration continued as more than 3,000 retail locations in the U.S. opened their doors at midnight for fans to be among the first to discover new Star Wars products. 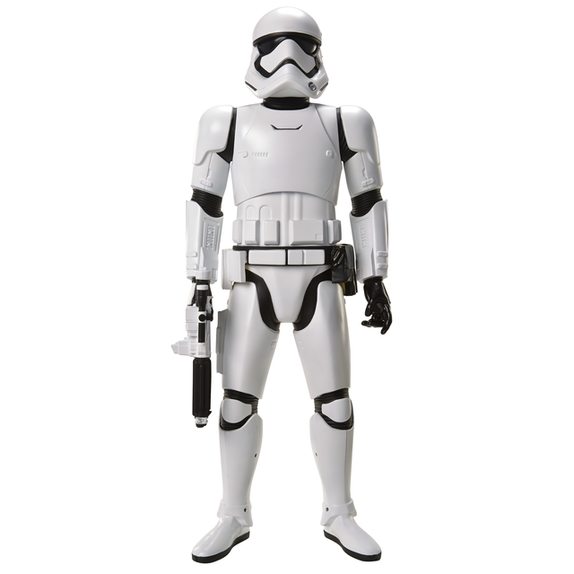 Star Wars: The Force Awakens Big Figs 31″ and 48″ Licensee: JAKKS Pacific MSRP: $34.99 for 31″; $99.99 for 48″ Available: September 4 Our 31 inch Massive Big Figs have 5-7 points of articulation and a signature weapon ready for battle. Kylo Ren: A dark warrior strong with The Force, Kylo Ren commands First Order missions with a temper as fiery as his unconventional Lightsaber. First Order Stormtrooper: Equipped with sleep armor and powerful weapons, the Stormtroopers enforce the will of the First Order. Standing at a whopping 48 inches, our Colossal scale Big Figs are interactive with an amazing motion detection feature. When you enter the room, they will recognize your presence and respond with movie lines and sound effects. The Stormtrooper also has an additional elbow joint to allow him to pose with his blaster. 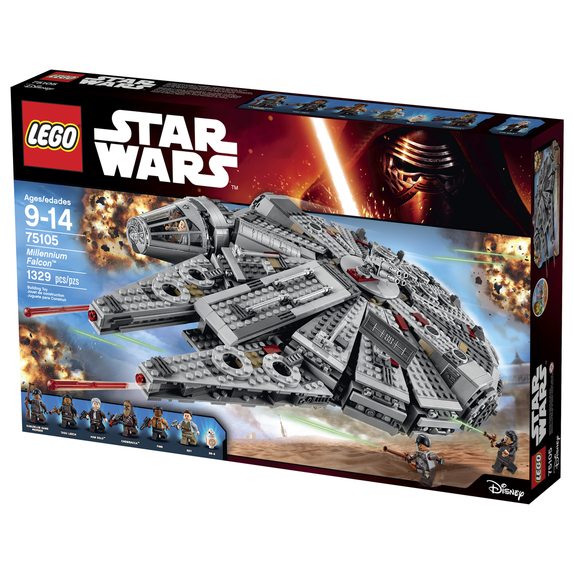 LEGO Star Wars Millenium Falcon..Licensee: LEGO.MSRP: $149.99.Available: September 4. .One of the most iconic starships of the Star Wars saga is back, and it?s leaner and meaner than ever before! As featured in exciting scenes from Star Wars: The Force Awakens, this latest LEGO® version of the Millennium Falcon is crammed with new and updated external features, including an even more streamlined and detailed design, detachable cockpit with space for 2 minifigures, rotating top and bottom laser turrets with hatch and space for a minifigure, dual spring-loaded tools, sensor dish, ramp and an entrance hatch. Open up the hull plates to reveal even more great new and updated details inside, including the main hold with seating area and holochess board, more detailed hyperdrive, secret compartment, extra boxes and cables, and storage for spring-loaded tool. And of course no LEGO Millennium Falcon model would be complete without Han Solo and Chewbacca, as well as other great characters from Star Wars: The Force Awakens. Activate the hyperdrive and set course for LEGO Star Wars fun! Includes 6 minifigures with assorted accessories: Rey, Finn, Han Solo, Chewbacca, Tasu Leech and a Kanjiklub Gang Member, plus a BB-8 Astromech Droid.

Beyond lightsabers, construction sets, figures and collectibles, fans can find products across a wide variety of categories, including apparel for all members of the family, home décor, lifestyle accessories, books and more. New Star Wars products can be found around the world at mass and specialty retailers, such as Amazon.com, Kohl’s, Target, Toys “R” Us and Walmart, as well as Disney Store and disneystore.com.

Highlights from the merchandise line found in the U.S. include:

–       The ultimate Millennium Falcon children’s bed from Pottery Barn Kids, looking like something seen from a galaxy far, far away

–       A villainous take on home merchandise featuring new characters from the Dark Side, such as First Order Stormtroopers and Kylo Ren available at JCPenney

To preserve the integrity of key movie moments, an additional wave of products will be released closer to the film’s debut, when fans will be able to find additional items featuring the newest characters, including Rey, Finn, Kylo Ren, Captain Phasma, BB-8 and more. On December 18, a Play Set based on Star Wars: The Force Awakens will become available for Disney Infinity 3.0 Edition, the latest installment of the best-selling “toys-to-life” video game from Disney Interactive.

STAR WARS and related properties are trademarks and/or copyrights, in the United States and other countries, of Lucasfilm Ltd. and/or its affiliates. © & TM Lucasfilm Ltd.

Disney Consumer Products and Interactive Media (DCPI) is the business segment of The Walt Disney Company (NYSE:DIS) that brings our company's stories and characters to life through innovative and engaging physical products and digital experiences across more than 100 categories, from toys and t-shirts, to apps and console games. DCPI comprises two main lines of business: Disney Consumer Products (DCP), and Disney Interactive (DI). The combined segment is home to world class teams of app and game developers, licensing and retail experts, a leading retail business (Disney Store), artists and storytellers, and technologists who inspire imaginations around the world.

Lucasfilm Ltd., a wholly owned subsidiary of The Walt Disney Company, is a global leader in film, television and digital entertainment production. In addition to its motion-picture and television production, the company's activities include visual effects and audio post-production, cutting-edge digital animation, interactive entertainment software, and the management of the global merchandising activities for its entertainment properties including the legendary STAR WARS and INDIANA JONES franchises. Lucasfilm Ltd. is headquartered in northern California.