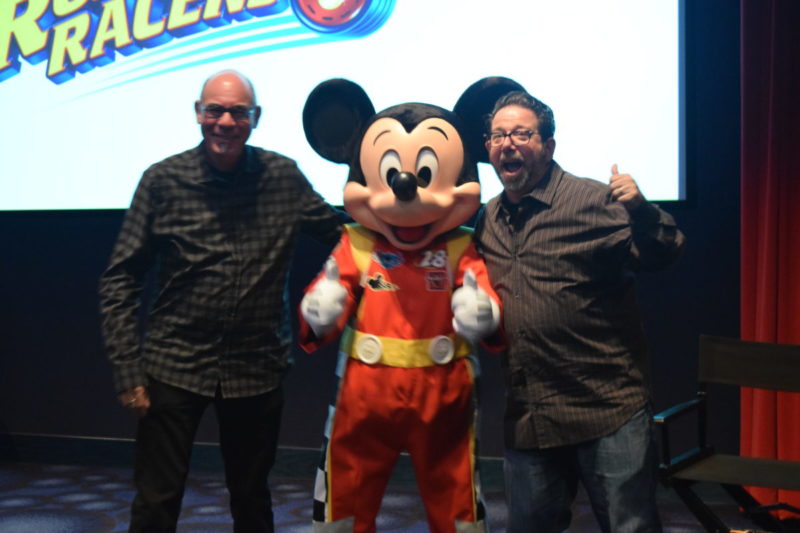 I may not have children, but I still love the classic Disney characters. A group of bloggers and I had the pleasure of screening two episodes of Mickey and the Roadster Racers, which brings back to characters that we all know and love. Afterwards, we spoke to Mickey and the Roadster Racers producers, Mark Seidenberg and Rob Laduca. We even took pictures with Racer Mickey! 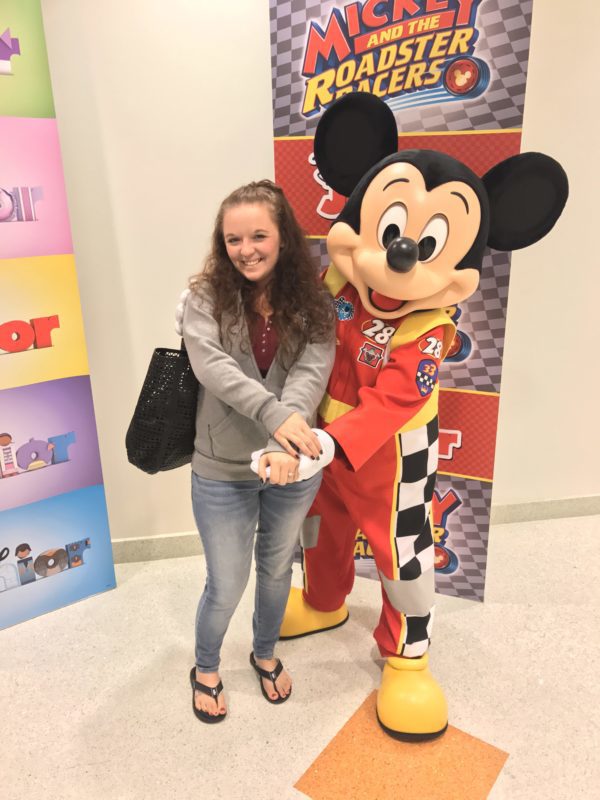 The Road to Mickey

These guys had a lot to say about bringing Mickey and the Roadster Racers to life! Being that they are so passionate about their work, our conversation with them could have lasted for hours. The producers began by telling us a little bit about the road that led them to Mickey.

Of course, they both grew up doodling and drawing regularly. Mark said he'd draw Mickey all the time because he was “all circles, so he was easy to draw“. It wasn't until college that Mark decided he wanted to be a cartoonist. 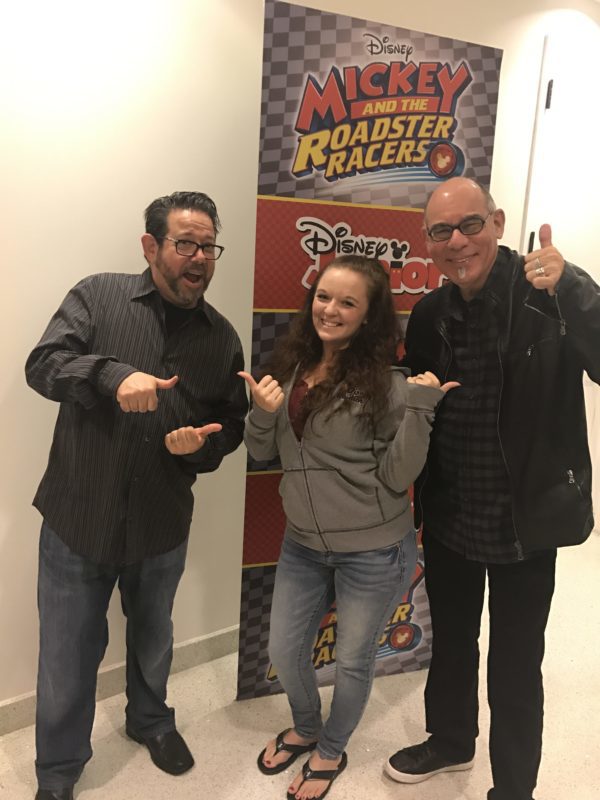 I thought Rob's love for drawing was quite interesting. His family owned a restaurant, so his love for the arts came from within. “So my father would bring home butcher paper, put it in on the wall, and I would just go crazy, you know, drawing constantly. And it developed into this!“

But how did they get started working with Disney Animation? It's simple, really. Well, Mark makes it sounds simple, at least.

Word came out through a friend of mine that Disney was starting a TV Animation group. And I thought, I want in. So… We started developing, Gummi Bears and Fluppy Dogs. The Walt Disney Studios was opening toso many different new avenues. Well at the time, I was working on actually Muppet Babies. Then I got the opportunity to work on Gummi Bears and that's where I met Rob.

Eventually the guys started working on Mickey Mouse Clubhouse together, Jake and the Neverland Pirates, and now Mickey and the Roadster Racers. 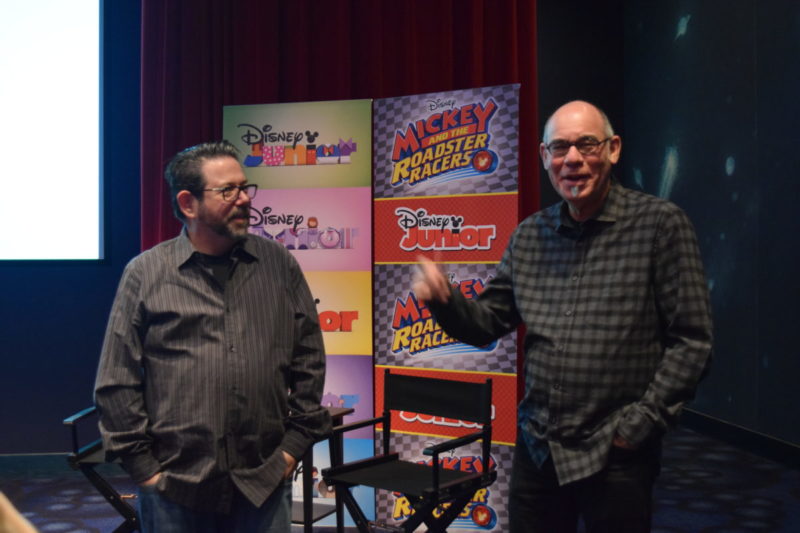 Classic Characters and Their Cars

Disney Junior actually approached the guys, asking them to come up with a new show. They found out that one of the most popular Mickey Mouse Clubhouse episodes was Clubhouse Road Rally, which involved the characters in their own special cars. They decided to go with it and that's how Mickey and the Roadster Racers came about! 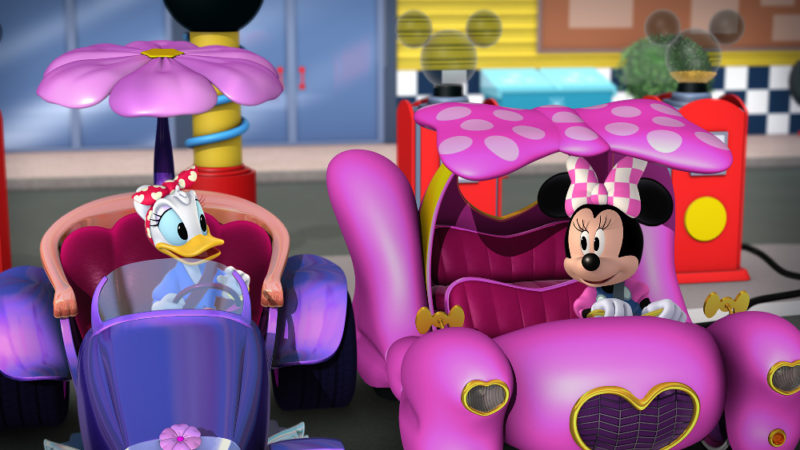 Mark explains that each character has a car that fits their personality:

The guys actually studied real car collections to help develop the ones on Mickey and the Roadster Racers. They even went to “Big Daddy” Roth (cartoonist) who customizes cars. The coolest thing is that they went to George Barris who did the Batmobile, the Adam's Family Munster-Mobile, and the Monkees van! They even got to check out Jay Leno's collections, which helped them get him on the show! 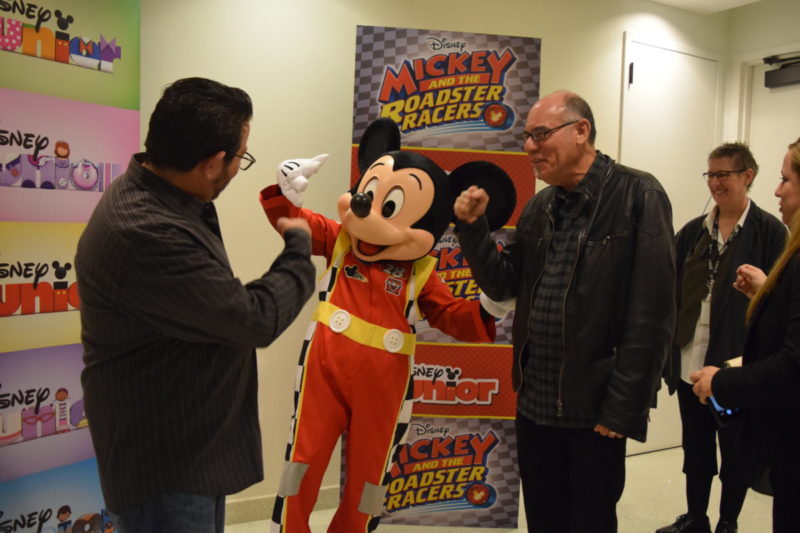 The biggest selling point for me to watch Mickey and the Roadster Racers is the celebrity voices in the show. They landed a few huge celebrities for different parts in the show! These aren't no-name celebs, either. They said the celebrities loved being in the Disney universe and seeing their characters come to life. So who can you expect in the show? Here are a few names that were dropped in our interview with the Mickey and the Roadser Racers producers and what the producers had to say about them:

There are even original voice actors, like Bill Farmer who's voiced Goofy for over 30 years! Basically, you can expect kids to fall in love with these characters and parents to feel the nostalgia of the old ones and excitement over the celebrity characters! 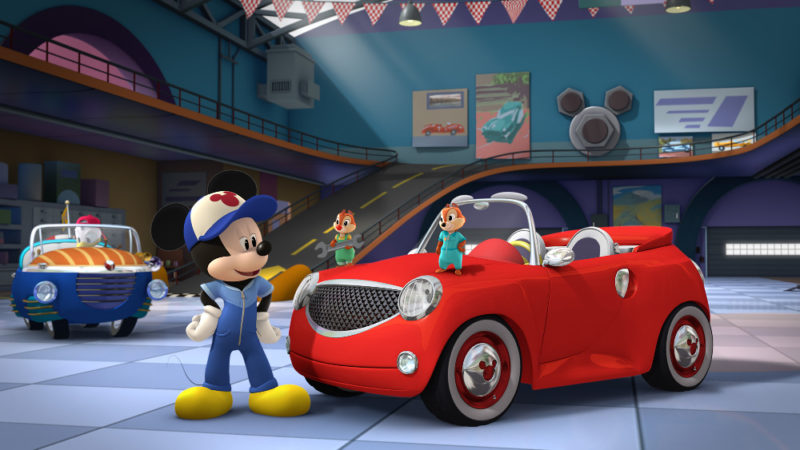 MICKEY AND THE ROADSTER RACERS – “Race for the Rigatoni Ribbon!” – Mickey and the gang compete against Piston Pietro throughout Rome, while a runaway giant meatball chases after Goofy. This episode of “Mickey and the Roadster Racers” airs Monday, January 16 (12:00 – 12:25 P.M. EST) on Disney Junior. (Disney Junior) DONALD DUCK, MICKEY MOUSE, CHIP, DALE

What characters will you see in the show?

We are obviously going to see the immediate Disney gang,  but are there more? Yes! You'll see a ton of characters that you already know and love and maybe some new ones. Some of the characters that were mentioned are below: 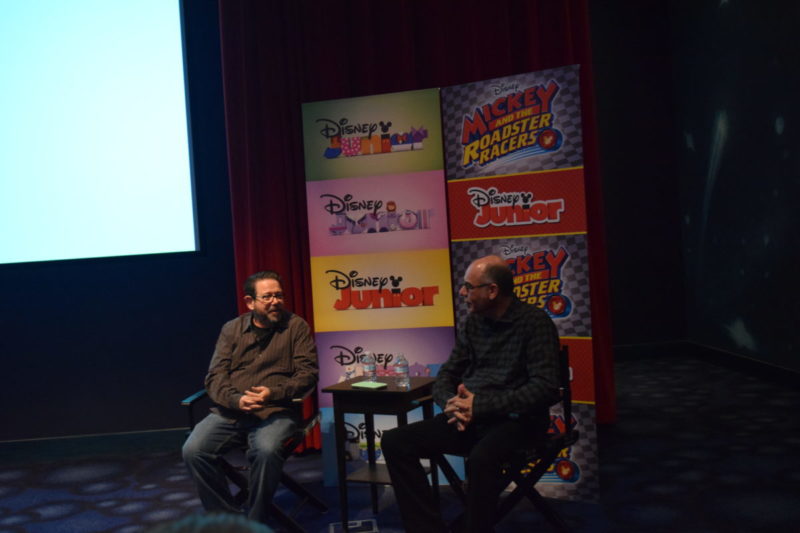 An important aspect of Mickey and the Roadster Racers is the messages it delivers to children. They keep the show very fun and entertaining, but there are very important takeaways! So what can you expect? The producers describe the different messages you can take away from the show, like “Teamwork. Friendship. Working together. Trust.” Mark gave us a specific example:

We'll see stories like Donald needs to deal with his temper. He has to learn to calm down. We have an episode called Guru Goofy. And Goofy teaches Donald to just slow down. And think about what you're doing before you go off the handle. They're themes that all kids can relate to. Like not getting your way.

All the stories will be about problems children may have in their own lives. “There will be stories where our characters have to learn to adapt to a new situation, 'cause adapting to a new situation can be very difficult,” Mark explains. Not only will they feel like they can relate to the show, they can learn a thing or two. Plus, parents can feel optimistic about their children watching this show. They teach children that there's always a “positive way to deal with their problems“. 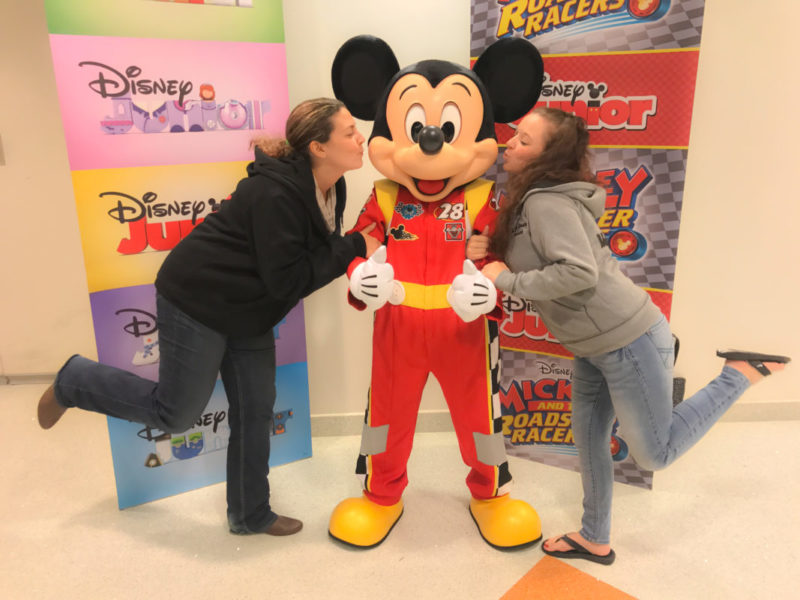 Tessa from MamaSmiths.com and I with Racer Mickey!

Disney Junior's animated “Mickey and the Roadster Racers,” a madcap car-racing adventure series for preschoolers led by Disney's No. 1 star, Mickey Mouse, and his pals Minnie, Pluto, Goofy, Daisy and Donald, will make its television debut in a simulcast SUNDAY, JANUARY 15 (9:00 and 9:25 a.m. EST), on Disney Channel and Disney Junior. Two more episodes will premiere MONDAY, JANUARY 16 (9:00 and 9:25 a.m. EST), on Disney Channel. Episodes will also be available on the Disney Junior app and Disney Junior VOD beginning Sunday, January 15, and on iTunes beginning Monday, January 16.