It wasn't too long ago that I watched Norm of the North for the first time. It's freaking adorable! How could you resist something so cute? You can't! The movie is finally available on Blu-ray combo pack! You should really give this a chance. The kids will love it and I have a sneaking suspicion that you will catch yourself giggling at it too.

To celebrate the release, we have some adorable activity sheets and a new clip! Plan a family night with your littles to celebrate this film release!

Lionsgate’s family adventure Norm of the North is available on Digital HD and Blu-ray Combo Pack!Follow the adventures of Norm, a polar bear from the Arctic who happens to have some very unusual talents and who has to head outside of his comfort zone to save his home! Norm embarks on a laugh-filled adventure in New York City with his lemming pals as they all try to stop greedy humans from turning the Arctic into a suburban neighborhood, and he makes some new friends along the way. 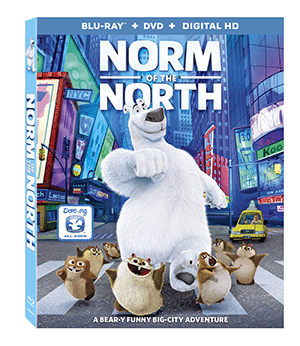