We need to be more conscious about our every part of our planet, especially the animals! For World Ocean Today, you and your children can join PBS Kids to explore ocean science and marine biology. They are offering summer events across the country, as well as screenings, activity pages, and hands-on activities. Be sure to plan a local event with your family this June! The details are below. 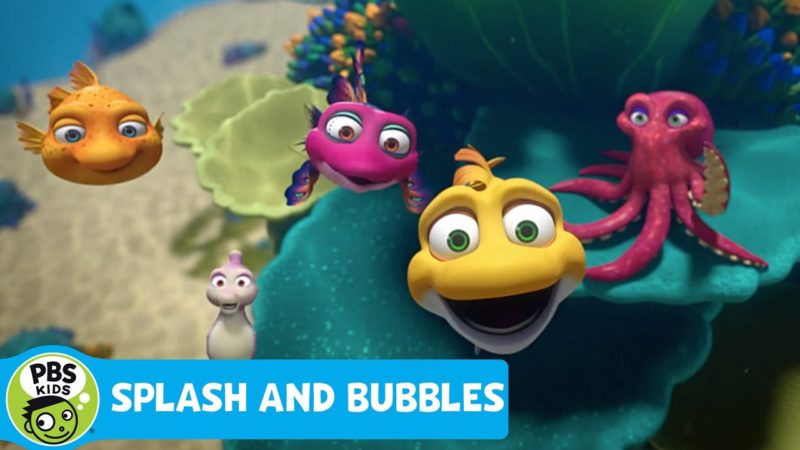 Los Angeles, CA (June 1, 2017) –  The Jim Henson Company, Herschend Studios and PBS KIDS are kicking off “Ocean Friends Forever,” a social media and community engagement initiative with multiple PBS station events across the country the week of June 1-8, to coincide with the internationally celebrated World Oceans Day on June 8. The effort is themed around the new PBS KIDS series SPLASH AND BUBBLES, which encourages children to explore ocean science and marine biology. SPLASH AND BUBBLES airs daily on PBS stations nationwide and is available for free on PBS KIDS digital platforms.

Awareness of the ocean and its diverse inhabitants continues to be an important necessity for us all. Few people realize how much we have left to discover about the animals, plants and unique habitats under the sea. In fact, a recent online omnibus study* of 1,000 adults provided some surprising results. Over thirty-seven percent of respondents believed that more than half of the world’s ocean has been explored, but scientists and researchers estimate that only 5% of the ocean has been explored! When asked if they know where most of the white sand on the world’s beaches comes from, only 6% of respondents knew the surprising fact – parrotfish poop. Parrotfish ingest dead coral and break it down into sand, which they then excrete. (Nearly two-thirds of respondents thought that white sand beaches are mostly comprised of rocks. Thirty percent answered glass.)

PBS stations across the country are gearing up to educate their community about the vast underwater world, with “Ocean Friends Forever” activities and materials for their summer events including screenings, activity pages, hands-on investigations, Splash and Bubble character appearances and more! Activity pages and hands on investigations are also available on PBS Parents/SplashandBubbles.

Additionally, “Help Our Kelp,” a new digital game at pbskids.org/SplashandBubbles, will encourage kids to help a kelp forest stay healthy by cleaning invasive species, like sea urchins and clams, from the environment. The game will be available online and on the free PBS KIDS Games app later this week.

PBS KIDS series Splash and Bubbles, encourages children to explore the natural undersea world and features endearing and humorous characters on fun-filled adventures. Utilizing the dynamic CG animation technology of the Henson Digital Puppetry Studio, each episode introduces kids ages 4–7 to the adventures of its title characters – Splash, a yellowback fusilier fish, and his friend Bubbles, a Mandarin dragonet.  Splash migrated all over the ocean before settling down with his family in Reeftown.  Now, he and Bubbles explore the world’s ocean, meet wildly diverse marine animals and discover otherworldly undersea habitats with their friends Dunk (a pufferfish) and Ripple (a seahorse). Together, they bring back what they’ve learned to share with their neighbors.

Splash and Bubbles is a production of The Jim Henson Company and Herschend Studios. The series is executive produced by Lisa Henson and Halle Stanford of The Jim Henson Company, Julie Phillips and Merrill Puckett-Miller of Herschend Enterprises, as well as John Tartaglia, Michael Shawn Lewis and Jill Shinderman. The series is funded in part by the Corporation for Public Broadcasting and by the National Science Foundation (NSF).