The women of Guardians of the Galaxy Vol. 2 had a lot to say about the fan reactions to this epic sequel. Find out how they handled fans, critics, and more in this exclusive interview from the 2027 D23 Expo! Disney hosted me at this epic event, but all my opinions are real.

As most of you know, I attended the 2017 D23 Expo a few weeks ago. What many of you may not know is that I was surprised with an exclusive interview opportunity with a couple women of Guardians of the Galaxy Vol. 2, Karen Gillan (Nebula) and Pom Klementieff (Mantis). This interview was even more special because we got to chat with them about the upcoming Blu-ray release of Guardians 2. Be sure you pick it up August 17, 2017! 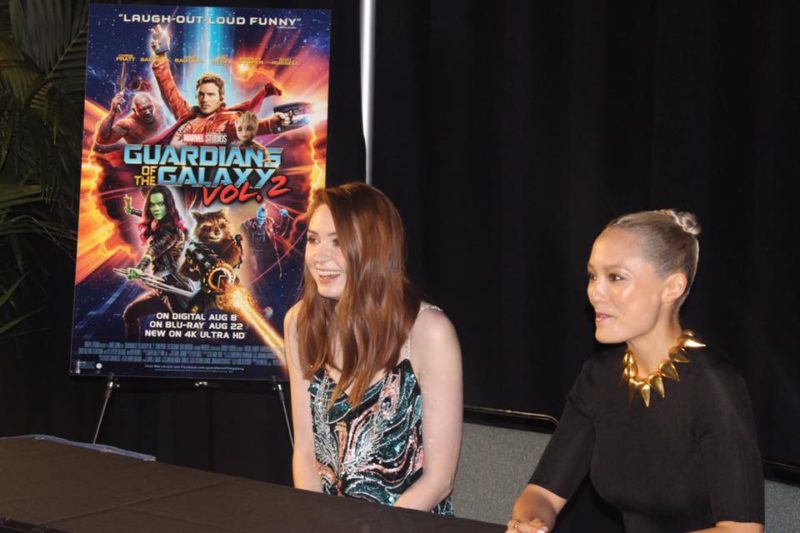 I've talked to these lovely ladies before. We had the pleasure of chatting about the theatrical release of Guardians of the Galaxy Vol. 2, so it was fun to talk to them about fan reactions to their roles in Guardians 2, as well as their excitement for the Blu-ray!

Karen Gillan loves her fans and their positive response to the film:

I feel like it's been received really well by the fans. When we were making it, it definitely felt like we were making something special, and everyone was delivering. It just felt like everything that was so good about the first film was kind of amplified in the second film. So I feel like we took it to the next level. And it would seem that the fans agree with that which is always the most important thing, so that's cool.

I personally felt like Guardians 2 was way better than the first! I laughed, I cried, I felt a little bit of everything. They definitely succeeded in that regard. Karen also said that after fans watched the second film, “Children are less scared” of her now. haha!

Both Pom and Karen are super excited about the release of Guardians of the Galaxy Vol. 2 on Blu-ray. I'm pretty sure we are all considering the tons of extras!

Delivering the ultimate in-home experience is the Ultimate Cinematic Universe Edition (which includes a collectible poster while supplies last) comes packaged to include a 4K Ultra HD version of the film, a Blu-ray, a Digital Copy and more than 80-minutes of exclusive, never-before-seen bonus materials. Bonus will take fans behind the scenes with the movie’s diverse, dynamic cast of misfits and inspired team of filmmakers, debut an all-new original music video starring David Hasselhoff and special guests, hilarious outtakes, deleted scenes, audio commentary by director James Gunn, and more.

Set to the all-new sonic backdrop of Awesome Mixtape #2, the film’s storyline continues the team’s adventures as they traverse the outer reaches of the cosmos. The Guardians (Chris Pratt as Peter Quill/Star-Lord, Zoe Saldana as Gamora, Dave Bautista as Drax, Vin Diesel as the voice of Groot, and Bradley Cooper as Rocket) must fight to keep their newfound family together as they unravel the mystery of Peter Quill’s true parentage. Old foes become new allies and fan-favorite characters from the classic comics will come to our heroes’ aid as the Marvel Cinematic Universe continues to expand. 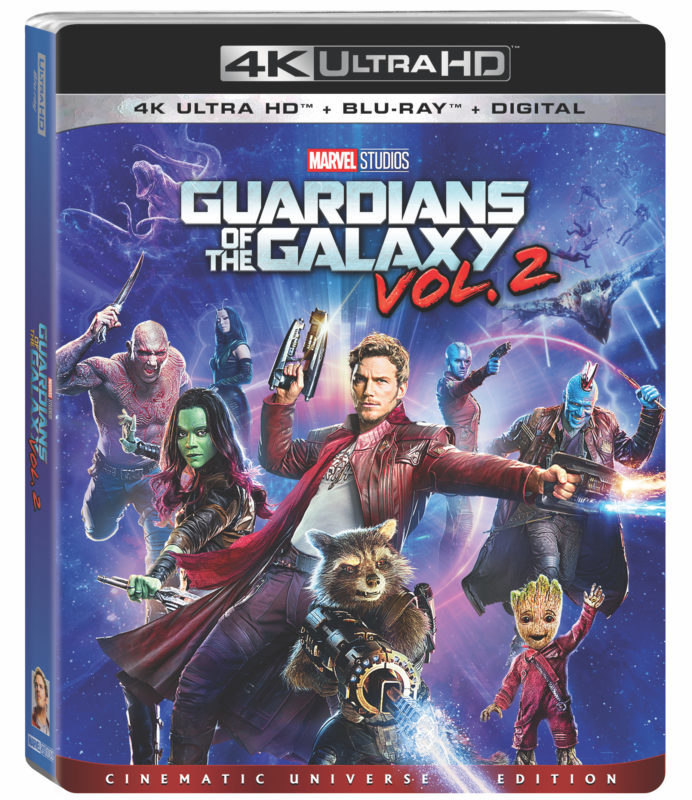 • The Making of “Guardians of the Galaxy Vol. 2” – A four-part, behind-the-scenes look at the making of the film, done in the style of classic-rock album liner notes.
• Visionary Intro – Director James Gunn provides context on how he continues and expands the storylines of these beloved characters in “Guardians of the Galaxy Vol. 2.”
• Guardians Inferno Music Video – Join David Hasselhoff and special guests for a galactic retro dance party.
• Gag Reel – Laugh out loud at all the hilarious off-script shenanigans and bloopers that took place on the set of “Guardians of the Galaxy Vol. 2,” featuring all your favorite Guardians.
• Four Deleted Scenes – Check out four specific scenes that had to be cut from the film, including two extended scenes and two deleted scenes.
• Audio Commentary – Check out a special narration of the film by director James Gunn, who guides fans through an inside look at the making of the movie.

All the features listed above plus four extra exclusives:
• Three Scene Breakdowns (Digital Exclusives) – We’ll reveal the anatomy of a few key scenes from the film. Discover the process in bringing these scenes to life. It starts with a doodle and the rest is film history. Audiences will be given the option to view 5-6 layers of specific scenes in the film. Scenes include “Eclector Escape,” “Gamora and Nebula,” and “Rocket and Ravagers.”
• Guardians of the Galaxy – Mission: Breakout! (Digital Exclusive) – Get an exclusive sneak peek inside the most anticipated ride at Disneyland, Guardians of the Galaxy – Mission: Breakout!. We’ll dig into the concepts and inspiration, and talk about what it took to bring the most epic ride at Disneyland to life.

Does not include any bonus materials.

Guardians of the Galaxy Vol. 2 Gifts