Beauty and the Beast is one of my all-time favorite Disney movies, mainly because I think I could be Belle in a fantasy world. Seriously, she's perfectly humble. She's beautiful without knowing it. She is intelligent, strong, and compassionate. I think we all secretly wish we carried those traits. I own multiple copies of Beauty and the Beast, but when I heard about the Beauty and The Beast 25th Anniversary Edition I knew that I'd add it to my collection – no questions asked. I could watch this movie all day, every day, especially because of the incredible bonus features! Make sure that you pick up this edition while you still can because you never know when it will disappear for-ev-ER!

Disney’s epic fairy tale Beauty and the Beast returns to Blu-ray with the release of Beauty and the Beast The 25thAnniversary Edition, the original animated classic.  The all-star voice cast features Robby Benson as Beast and Paige O'Hara as Belle, along with the castle’s enchanted staff including Jerry Orbach as Lumiere, David Ogden Stiers as Cogsworth, Angela Lansbury as Mrs. Potts, and they’re all just as magical as you remember them!

There is also a host of all-new bonus extras including a rare opportunity to gather around the piano with some of Disney’s greatest composers, including Alan Menken (“Beauty and the Beast,” “Aladdin”), Stephen Schwartz (“The Hunchback of Notre Dame,” “Pocahontas”), Kristen Anderson-Lopez (“Frozen,” Disney’s upcoming “Gigantic”), Robert Lopez (“Frozen,” Disney’s upcoming “Gigantic”) and Lin-Manuel Miranda (Disney’s upcoming “Moana”) as they sing and share how they’ve personally been inspired by the film’s award-winning music; a look at how Walt Disney himself sought to adapt this famous fairytale; a nostalgic look back with Paige O’Hara, the voice of Belle; behind-the-scenes access into the recording booth with the cast; and a sneak peek at Disney’s upcoming live-action re-telling of “Beauty and the Beast,” arriving in theaters in 2017. 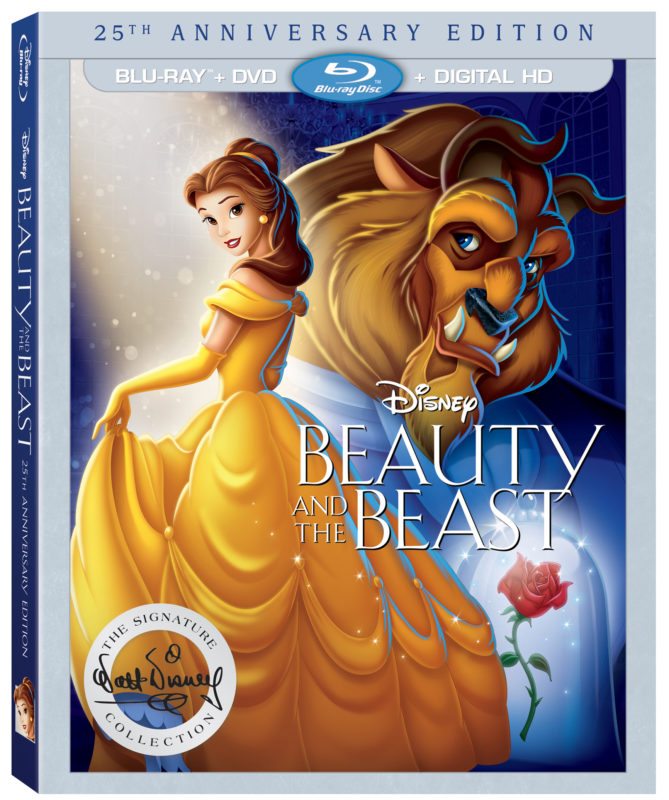 Beauty and The Beast Bonus Features

Classic Bonus Features – These offerings from prior home entertainment releases include over five hours of bonus material, such as an alternate version of “Be Our Guest” and the “Beauty and the Beast” music video performed by Celine Dion and Peabo Bryson, and deleted scenes.

* Bonus features may vary by retailer

Beauty and The Beast Gifts