It would be fun to say that my started like any other; to say that I just happened to run into Diego Luna or that I interview Star Wars actors all the time. Well, I don't and this day didn't start like any other. This Florida girl woke up in San Francisco, California with one destination in mind: the Lucasfilm HQ. With my Star Wars journal packed full of questions and my mind swirling with memories of our the night before (at Skywalker Ranch), I was dying to meet the man who's featured in every Rogue One trailer. 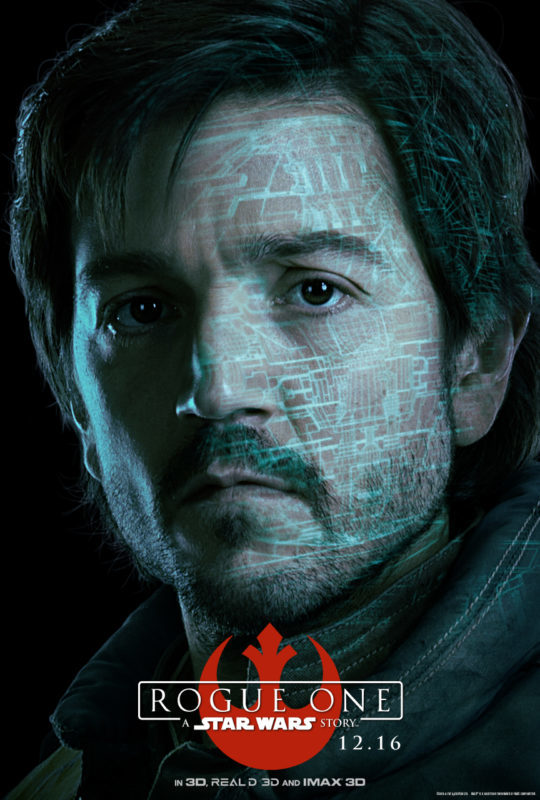 After much anticipation and exploration of Lucasfilm HQ, it was now time. The clock struck 11:00am and 25 anxious bloggers cheered and applauded as our first Rogue One actor of the day walked into the room – with a huge smile on his face. I'm not sure if we were all swooning or if he was. Either way, it was clear that we were all very excited to be there. 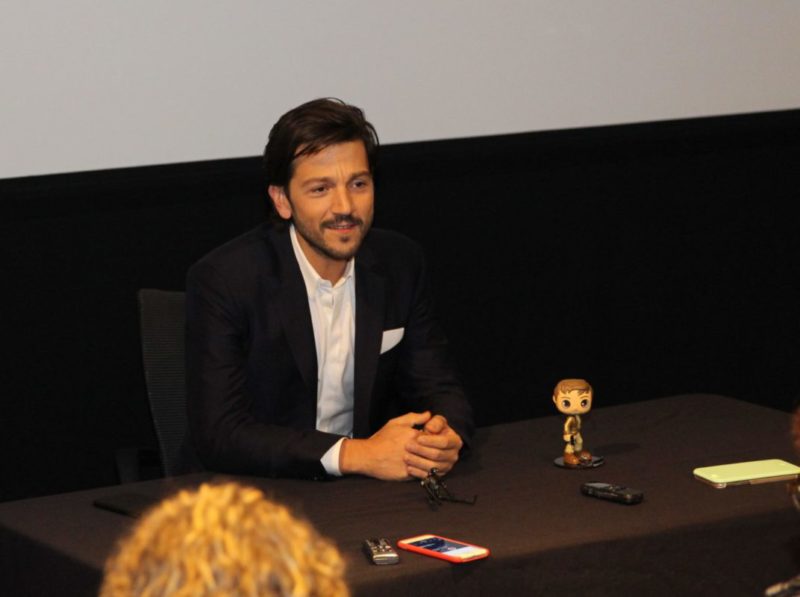 While we've only screened 28 minutes of Rogue One footage, we know that Diego Luna's role as Cassian Andor is a huge part of the movie. It doesn't take special footage to get that idea. The trailers give you a pretty good idea of who Cassian Andor really is, but Diego Luna described him best as an “intelligence officer for the rebellion”. He goes on to explain that Cassian is kind of a big deal. “He's a pretty damn good rebellion captain! He's in charge of the most important mission for the rebellion and has to make sure [everything] works together.” 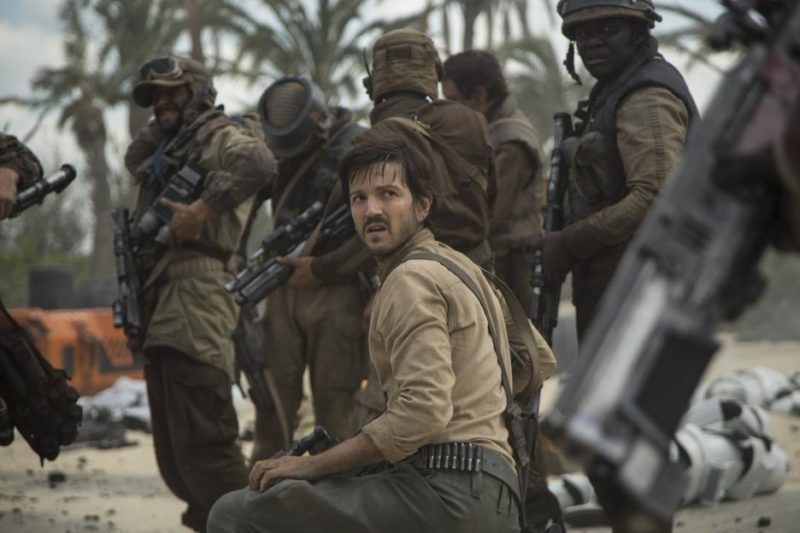 Cassian is quite the mystery man. Based on Diego Luna's introduction to Cassian as a “spy” that “doesn't like war”. It sounds like Cassian is a pretty great guy. “He believes in the cause and would do anything for the cause. He's ready to sacrifice everything and he's a true hero. He doesn't have special powers. He's no Jedi.” It sounds to me like Cassian could very well be the link that keeps everyone together when times get rough.

After chatting with Diego Luna for a few minutes and hearing his introduction to Cassian Andor, I have a feeling that Cassian in a very strong leader with a sensitive side. 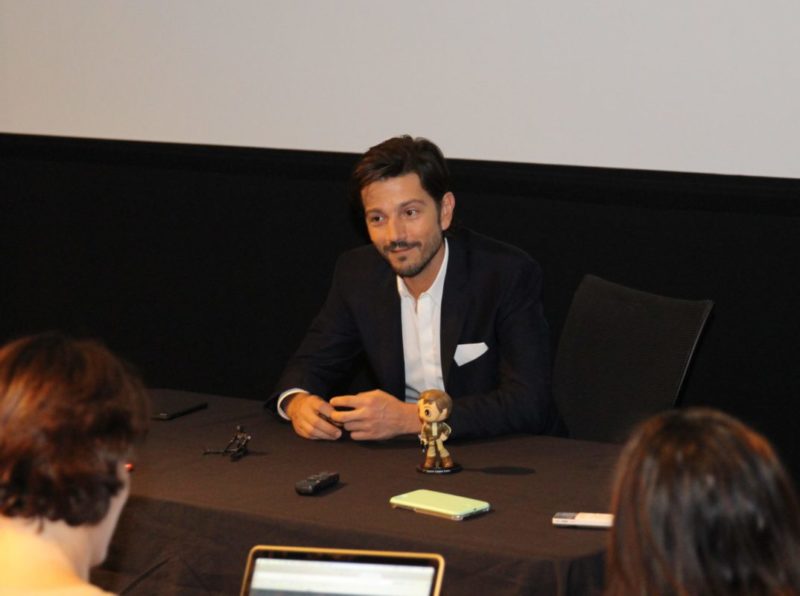 Preparation for such a major role could be very difficult for an actor. First of all, it's Star Wars – the biggest franchise in the history of film. Secondly, you want to do the role justice. You were picked for a reason! Diego used his personal life experiences to help shape him into Cassian.

“The theme is freedom. And living in Mexico and growing up there, I see beautiful things. I hear amazing stories, but there's a contrast. We have one of the richest men on the planet in a country that has so much poverty. So that contrast shaped my view and film is a way to get all that out. Put it on the table. Share it with others and start a debate!” Diego Luna went onto describe how passionate he felt about Rogue One: A Star Wars Story as Gareth began to describe the film with him.

I think this film has a lovely message behind it. It's about people getting involved and taking control of their reality.

I find it interesting that he views Rogue One: A Star Wars story in such a realistic manner. People look at Star Wars as strictly fiction and entertainment, but just as Felicity Jones showed us, you can see how the story could be very relatable.

Diego hints that he'd never take on a role that didn't challenge him emotionally or touch him with a realness that we don't get from every film.”You don't wanna be talking about something that doesn't mean anything to you. You don't wanna do a theme that you don't [really] care about.” 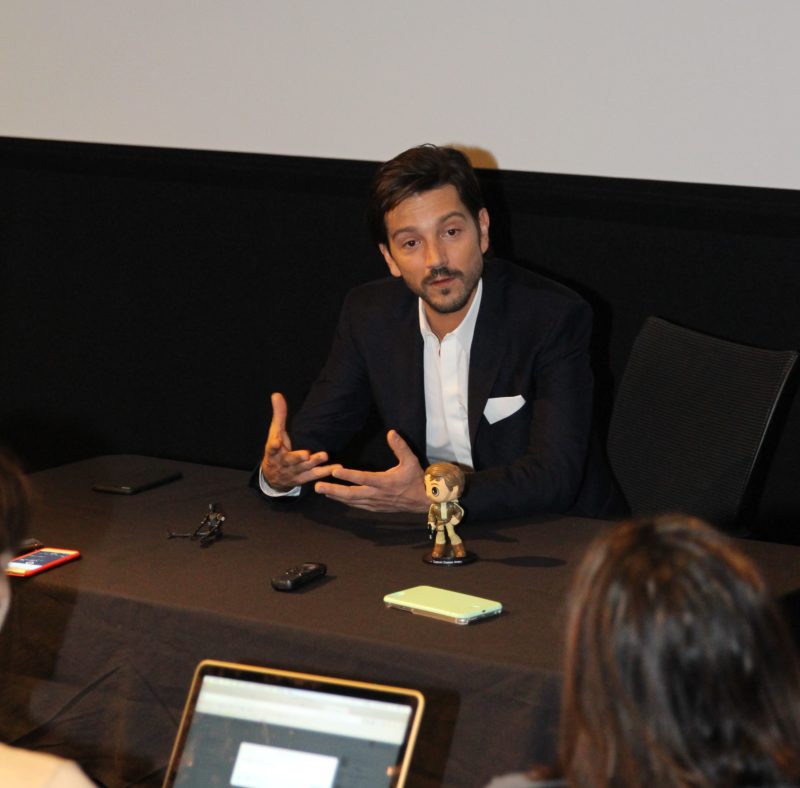 An important message we should take away from Rogue One: A Star Wars Story

If there's one thing that will make an interview memorable for me, it's an inspirational actor. It's an actor like Diego Luna, who uses his voice and influence to make great things happen. Diego took this world of fiction and made it into a reality for all of us. He reminds us that we have a lot of growing to do and maybe we could learn a little something from Rogue One: A Star Wars Story. 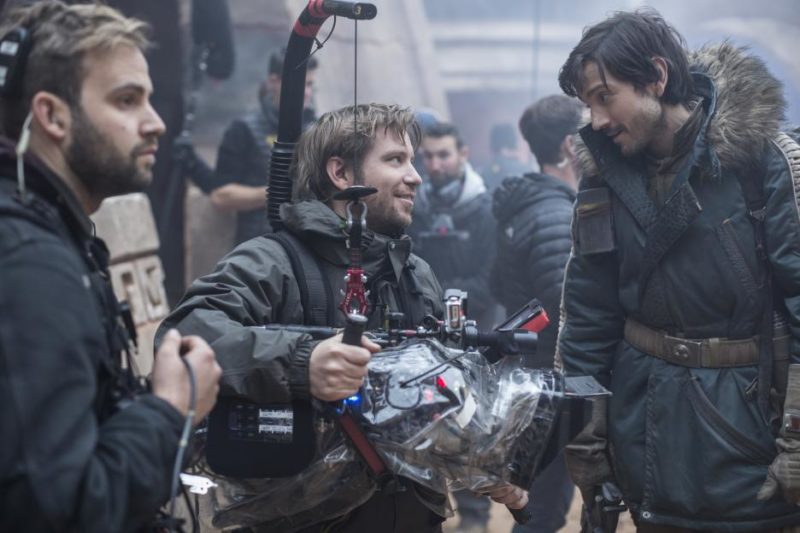 Diego Luna had the full room of bloggers laughing as he described his excitement about the movie. He basically said he'd do whatever it took to be in Rogue One. “I would join just as a fan, part of the crew, or whatever! [If] he would have said, I want to you to be a Stormtrooper and just wear an outfit and be miserable for a long time until Felicity's character kills you – I would've have said yeah, let's do it!” I'm pretty sure that any person, anywhere would have said the same thing. Diego Luna is a reminder that actors are humans and fans, too! 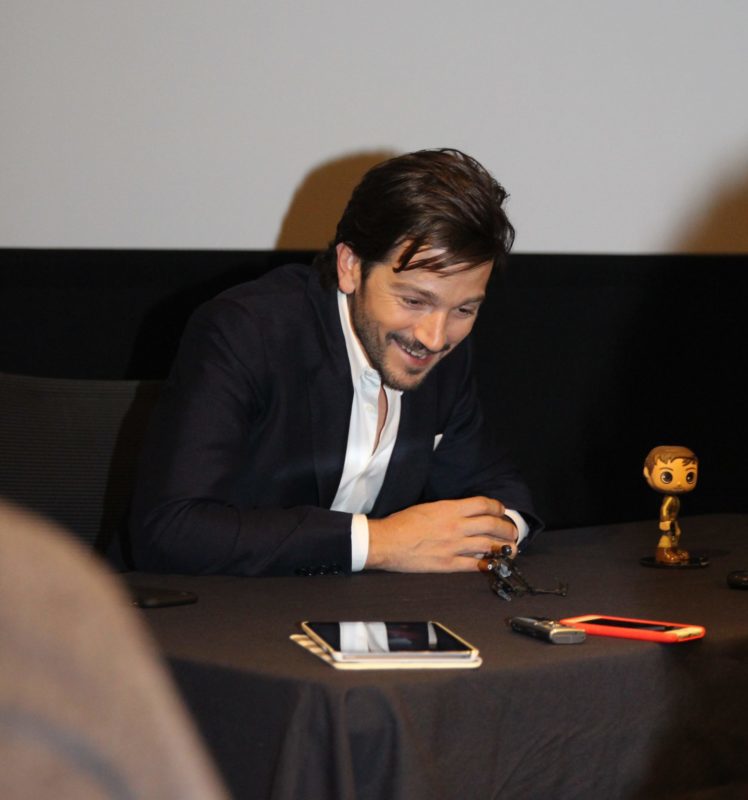 Being that I was in a room with lots of mommy bloggers, we had to know about how this role has impacted Diego's children. It made us laugh to hear that Diego's son knows more about Star Wars than he does. “He's eight years old, but he has seen everything and on this one, I didn't want it to stop him because, everyone's gonna be talking about it. I want him to feel part of this, you know? And he's so excited!”

One of the most touching moments during our interview with Diego Luna was hearing him talk about how Star Wars has connected him and his son. “I share the excitement with him. When we were watching The Force Awakens, we were there holding hands, and enjoying the moment, you know? I wasn't like ‘let's watch this cartoon and talk about what they're saying' I wasn't the dad there. It was two pals watching a film, and that was very sweet.” 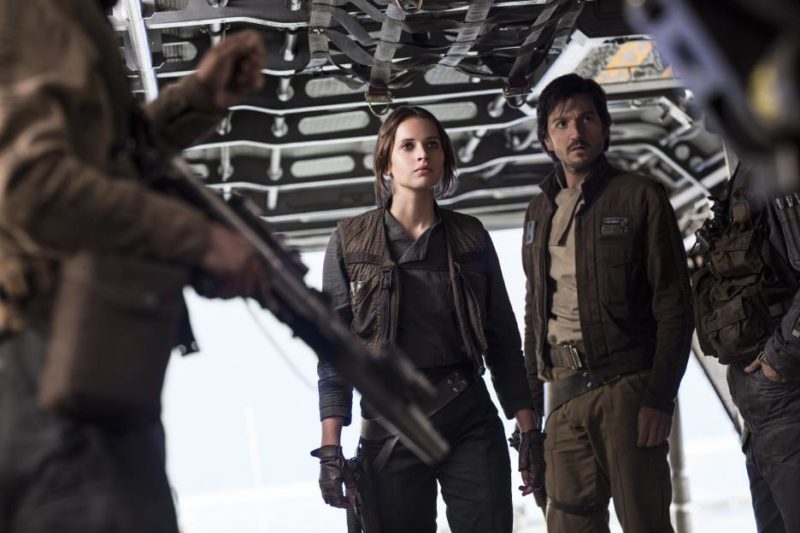 Understandably, being an actor can be very hard on family. You're working long hours, filming in other countries, and you have to keep everything top secret. While this would usually seperate a family, Diego Luna describes how this particular role connect him and his son. “Work represents something very negative to my kids. It's what keeps me away. So this is special. I am telling them I'm going to work and my son, instead of crying, says ‘Yeah! go, go! You've gotta be on time, Dad, and make sure you do it right. Do what Gareth says. Don't mess it up.'”

It's hilarious to imagine the amount of pressure Diego had to feel knowing that Rogue One: A Star Wars Story was new to the saga, that his character new, and that his child is really counting on him to do everything just right! 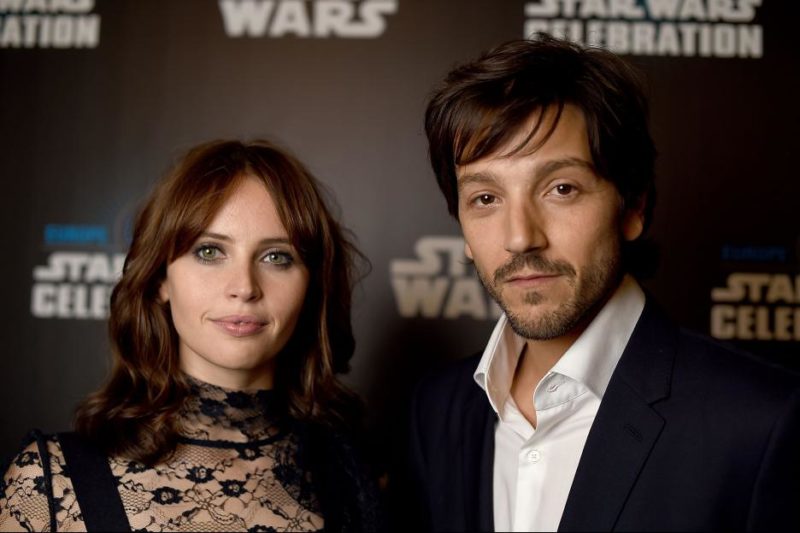 The struggle of being a Star Wars fan, but keeping Rogue One a secret

Just as we do when something wonderful happens, Diego's first reaction when landing this role was to tell everyone – his family, his best friend – but he couldn't! “It's not happening until I tell my best friend. It's not real until I share this with my father,” Diego expresses the painful process of keeping quiet. It was (and still is) very top secret. He was living his dreams and couldn't say a thing to anyone. Oh, the struggle. He describes how it felt to keep the biggest secret in the galaxy: “It was difficult because I'm a fan, so I would go home and [be] like, oh my god, this is great. But imagine you're a fan, and they tell you, ‘You're gonna go live this amazing experience in that world from the inside, but you cannot tell anyone.'”

“We couldn't tell anyone out there, so Felicity was my shrink, my friend, a little bit of everything, and I was the same for her, you know? An that kept us sane, basically.”


Being the gentleman that he was, Diego Luna agreed (and was excited to) take a photo with all of us. He was quite delighted to be surrounded by 25 women. I mean, who wouldn't be? Yes, I am right next to him. Maybe I was afraid to get too close because he was a tad bit charming. 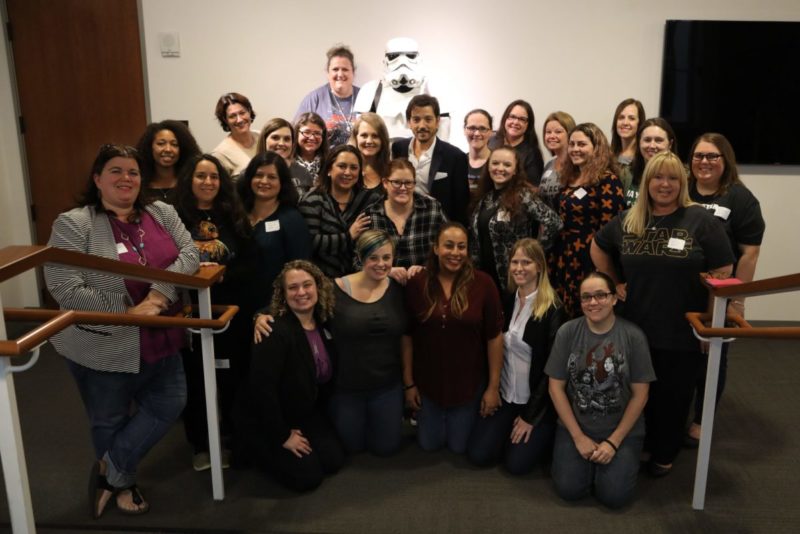