I have an awesome giveaway for all of my lucky readers! It's going to be a very quick one, so you will have to get your entries in right away. Good luck to everyone! This very special Easter prize package includes a random assortment of 6-8 exciting Dinotrux toys & books! 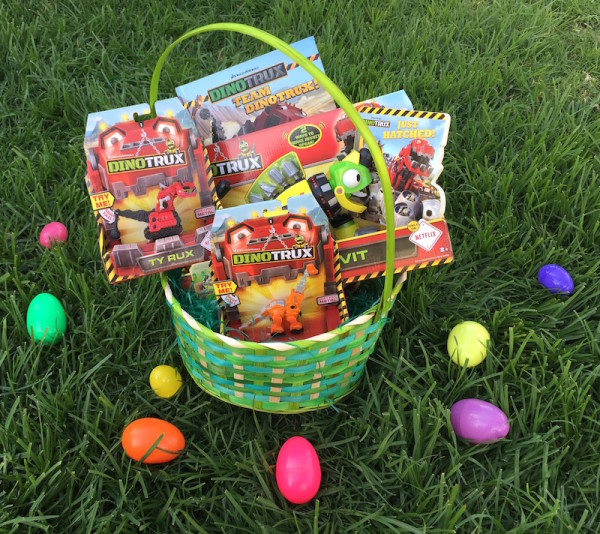 DINOTRUX toys from Mattel include assorted characters in both the die-cast and Sights & Sounds collections, now available at Toys “R” Us, Walmart and Target! DINOTRUX books include an assortment from the upcoming LB Kids line, arriving in stores April 5th, 2016! Good luck winning this DINOTRUX Easter Basket! Titles include the following:

Check out these new DINOTRUX clips!

Ty and his best friend Revvit are back, building and battling in an all-new DINOTRUX Season 2! The turf war escalates when D-Structs unveils a buzz-saw tail, battles with battering-ram Skya and kidnaps Revvit. Together the team saves the Ottos from a meteor crash, goes underground to escape the Desert Scraptors and builds a racetrack with Ton-Ton’s friends the Dumps. The fun never ends with the crew that’s half dinosaur, half truck and all awesome! From Dreamworks Animation, DINOTRUX Season 2 premieres March 11, only on Netflix.

About the “Meet the Ottos” clip and Season 2

The Mesozoic Era continues today when Season 2 of DreamWorks Animation’s DINOTRUX premieres exclusively on Netflix. This season Dinotrux introduces tons of cool new species and characters, one being the Hex Wrenchtools – the hilarious and familiar looking Ottos – a highly-organized and adventurous bunch! They have swiveling wrench heads, perfect for builds and repairs, and magnetic claws made for gripping metal and climbing rock! Meet these new tools in the clip below and get a sneak peek of what’s to come this season with the scene stills – both of which we’d love for you to share!