“No Way! We Won!?”: As I have mentioned a million times before, my boyfriend and I won a trip to the iHeart Radio Music Festival in Vegas! For the past couple of months we have been texting “keywords” that we have heard on our favorite Rock radio station 101.1 WJRR. We recently moved to Deltona, FL and while we were searching for a home to rent, we found this radio station. We haven't stopped listening since. I feel like it was good luck for us seeing how we won from that station! *Shout out to them for being so incredible with their entertaining hosts and their great choices in music* So anyways, we texted the keyword to them on our way home from a day of shopping in Orlando. An hour later my boyfriend received a call telling him that he won!! He started screaming in the car, “No Way!? We Won!?” I started questioning him immediately, “OMG!? Did we win the iHeart Radio trip? Babe! What did we win?? Are we going to Vegas!?” We didn't believe it at first. We thought there was some sort of “catch”. It seemed way too good to be true. It wasn't until the next day when it was announced on air that we won, that we really started to believe it! It STILL felt too good to be true though. A week or so later we received another call confirming our hotel stay and our flights. It was really happening! We were going to the iHeart Radio Music Festival in Vegas for FREE!!

My impression of The iHeart Radio Music Festival Prior To Attending: I had of course heard of the festival so many times because the radio stations are constantly throwing our keywords to win tickets. I also listen to iHeart Radio from the iPhone app, so I knew a little about it. I basically knew that it was a festival that had only the BIG artists! I knew that every artist performing would be one that I had listened to or heard of before. My boyfriend told me that they were known for all of their surprise guests. I took that lightly, but was incredibly excited to attend because Coldplay, 50 cent, Lorde, Train, and so many more artists would be there!

Preparing For The Trip: Preparation was pretty easy considering the fact that we didn't have to plan our flight, hotels, and finances. We basically needed to show up at the airport with enough money for eating, gambling, and shopping! The flights were booked by the iHeart Radio planner. We asked him to book us the EARLIEST flight to Vegas and the LATEST flight home. Since it IS [dry and hot] Vegas, we made sure to pack warm  weather clothing, comfy sneakers, chapstick, lotion, and sunscreen! As for planning for the festival, all we needed to do was respond to the emails from the planner, agreeing to the terms and conditions, as well as providing our tax information (yes you have to pay taxes on a prize valued this high). We also had to RSVP, just so they knew that we would definitely be coming.

Leaving For Vegas: It's 2:30 AM and we are leaving to the airport to catch our 5:45am flight to the overlay airport in Charlotte, NC! (Early? I know! The earlier the better!) Our flight information and our itinerary was sent to us about a month ago, so we have no worries this morning! We know exactly what to do and where to go! We caught our flight on time. An hour later we were in Charlotte, NC with an hour in between flights. We got to the gate on our next flight right before they began boarding. Finally we were on our way to Las Vegas, NV for the legendary iHeart Radio Music Festival!

Arriving in Vegas: We are FINALLY here! After a very long (5 hour) flight. On the plane we heard a few people chatting about the festival. We were excited to see others on our plane attending. Our itinerary explained that we would have a complimentary shuttle from the airport to the MGM Grande Hotel and to look for individuals holding iHeart Radio signs. We got off of the plane as quickly as we could and seen the first person with the sign. He was very friendly and told us the direction to go to find the next person with the sign. We followed the signs until the we reached the last one which led us to the shuttle. We were surprised to see that the shuttle was actually a nice air conditioned bus! Before we hopped on, a nice gentlemen took our bags and offered us free Pepsi! That was an awesome extra! We felt so welcomed and special! When we loaded onto the bus it was full of happy iHeart Radio Music Festival winners! While we waited for the bus to finish loading, two young men walked through the bus passing out Pepsis to anyone who wanted one. We waited about 10-15 minutes before we left. Finally, we were at the MGM Grande Hotel in Las Vegas!! 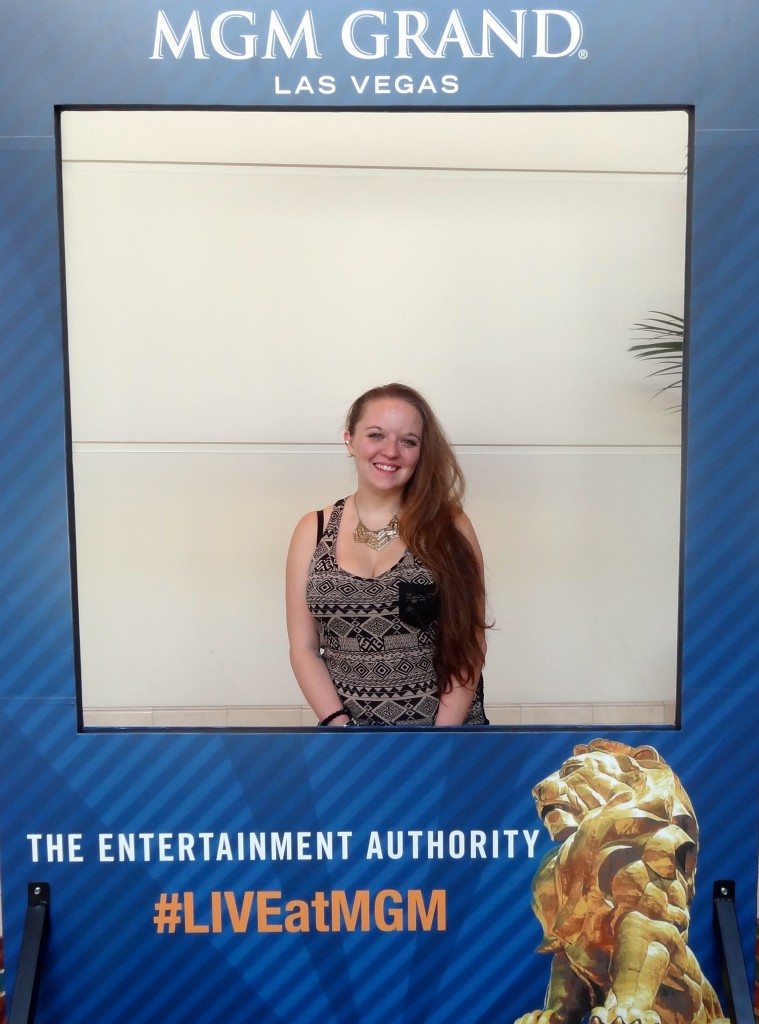 Checking Into The Hotel: We arrived 4 hours before check in time, so we assumed we would need to leave our bags with the bellman while explored. We stood in the check in line anyways, just to double check. The line was a bit long, which is to be expected when there is an event this huge. We enjoyed complimentary fresh fruit infused water that was in the lobby as we waited. After waiting about 20 minutes (which is reasonable) we arrived at the check in counter. To our pleasant surprise the young lady at the counter had rooms available! We booked a king size bed, but switched to 2 queens because it was all that was available at the time. We didn't have to pay anything (thanks iHeart Radio), but a credit/debit card was required for incidentals. Up to floor 12 we went! 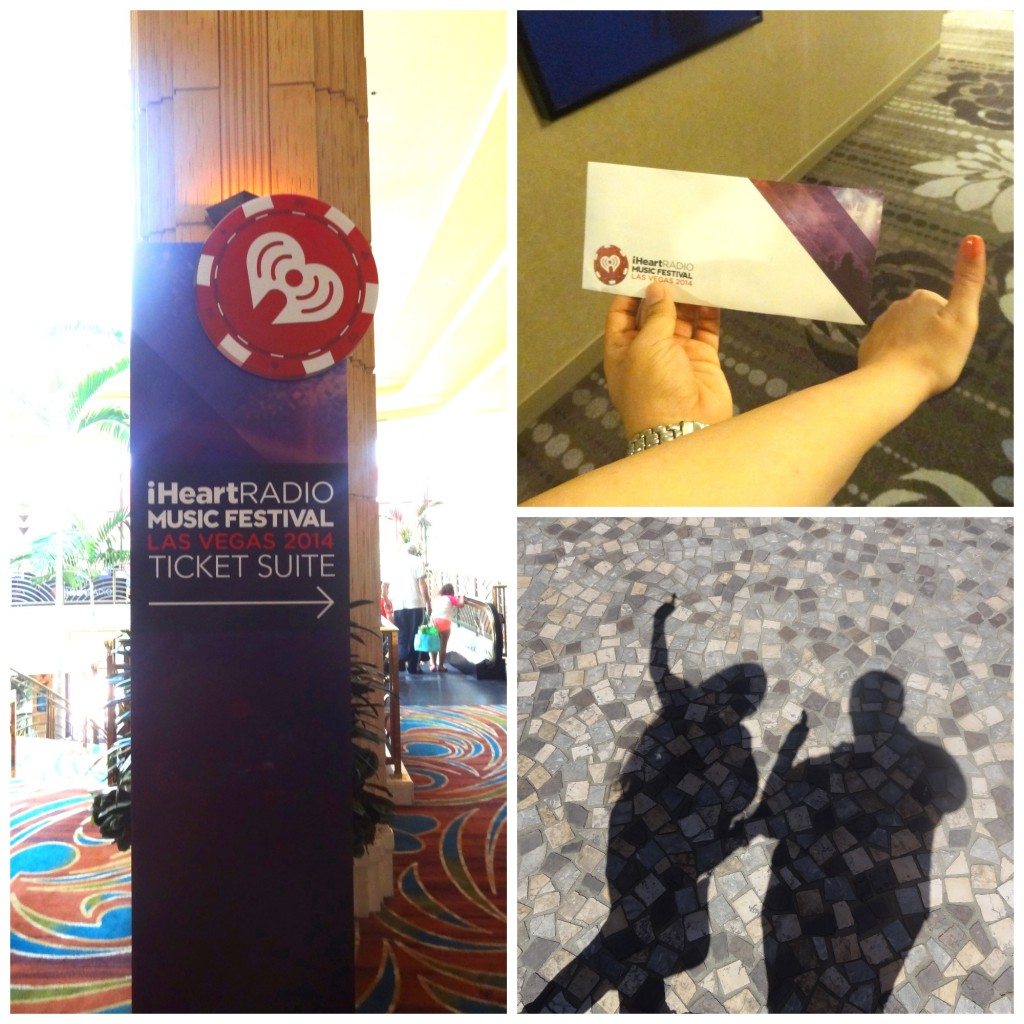 About the MGM Grande Hotel in Vegas: First of all, we couldn't have stayed at a better hotel since the festival was held in the MGM Grande Arena! It's great that we didn't have far to go to reach the festival. More about the hotel… This hotel is absolutely GORGEOUS!! It's less of a hotel and more of a paradise! If you have never been in a hotel like this, then the best way for me to explain it to you is to say that it is almost like a cruise ship. There is a little bit of everything! Behind the check in desk were HUGE screens playing iHeart Radio artists. In the middle of the large lobby was a golden MGM Grande Lion statue. Everything from the ceiling, down to the floors was absolutely gorgeous. I was shocked immediately when I entered our room! It was HUGE. I did not expect a room that large. It was very spacious! It had a nice desk and chair for you to do business at. The beds were incredible comfortable. The AC worked great. The bathroom was HUGE with a nice size bathtub. Overall, we were really impressed with the hotel. We were really happy that the MGM Grande Garden Arena was easy to find. After we dropped our stuff off, we headed downstairs to the assigned ticket pickup area. This was very easy. My boyfriend gave the girls at the ticket table his ID and she gave us an envelope with our tickets and sent us on our way. 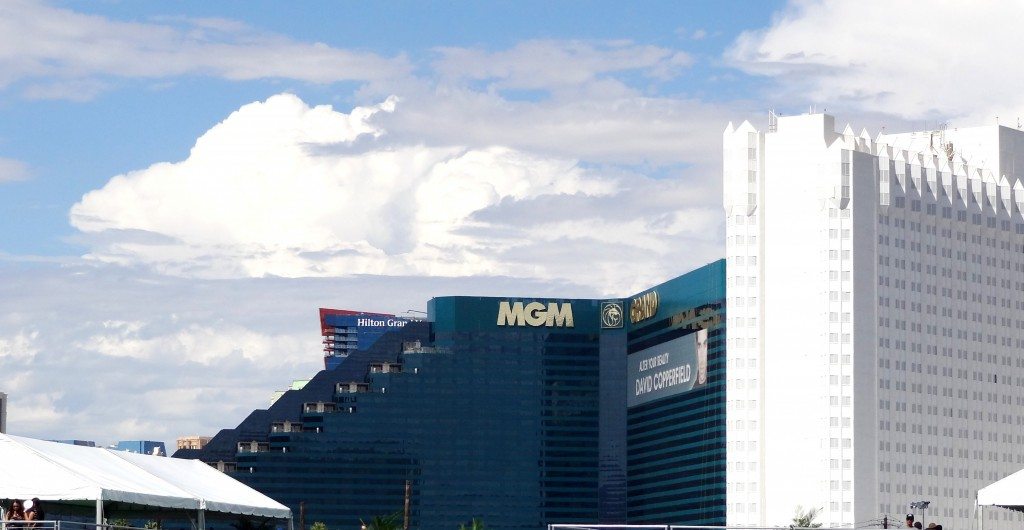 Stay Tuned For my “Night 1 Experience” !