Ever since the first trailer for Light Between Oceans released, my curiosity was peaked. I'd never read the book or heard of it, for that matter. However, my friend over at AccordingToStella.com told me that she was over-the-moon with excitement about the movie. Being the movie connoisseur that she is, I figured that there must be something great about this movie. Typically when a book is made into a movie, it's because the book was so incredible that it deserved a spot on the big screen. While I was excited about a new romantic drama, I still had my reservations. I was afraid that it would drag or be too slow. As I'd seen friend, after friend, post about how incredible it was – I became hopeful. I decided to attend an advance screening, so I could let all of you know exactly what to expect with my Light Between Oceans Review. 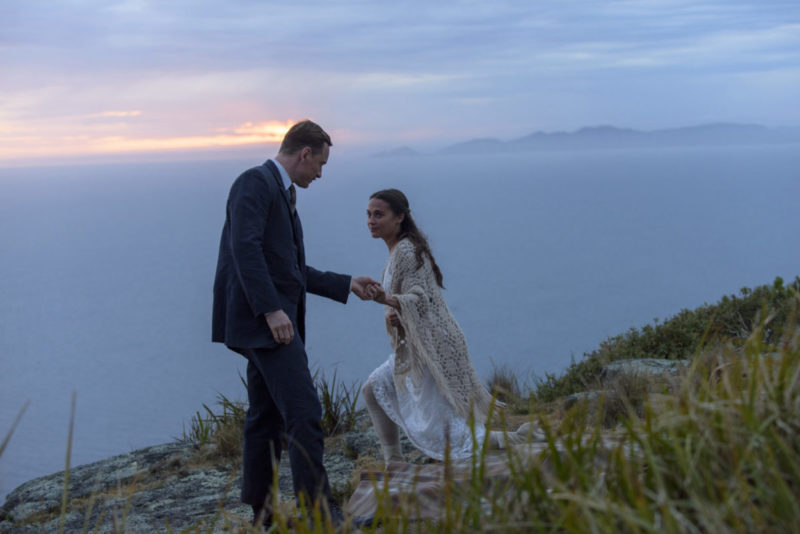 Michael Fassbender stars as Tom Sherbourne and Alicia Vikander as his wife Isabel in DreamWorks Pictures' poignant drama THE LIGHT BETWEEN OCEANS, written and directed by Derek Cianfrance based on the acclaimed novel by M.L. Stedman.

1. You do not need to read the book to enjoy the movie.

As I mentioned, I'd never read the book or even heard of it until the movie popped up on my radar. I knew just as much about the movie as any average viewer. I only knew what I saw in one trailer and what I read in the synopsis. With that said, I was never confused or lost during the film. I didn't feel as if there were any parts missing or lacking explanation. Actually, now that I've watched the movie, I'm dying to read the book. Books are usually better than the movie, so I am really curious about what the book! Could it possibly be any more romantic or dramatic?

Speaking of romance and drama, this movie is full of it. Don't make assumptions, though. It's the furthest from being cheesy or over-the-top. In fact, it's a story unlike any other. There's something so compelling about it. I just want to know more. I need to watch it again and read the book because I am officially emotionally invested. The story may be unique, but it's one that an audience feels like they could relate to if they were put in a similar situation. Basically, there's no good guy or bad guy. You feel connected to every single character. That is a damn good story and incredible acting.

I need to watch it again and read the book because I am officially emotionally invested.

3. It gives you mixed emotions.

You really do walk away with mixed emotions. You will ask yourself, “What would I do?” The entire 40 minute ride home from the theater, my boyfriend and I talked about what we would do in a situation like that. Simply talking about it made me emotional. I told you that I'm invested (I partially blame it on being an empath). I love movies that make me want to talk to the screen. I had to stop myself from saying “don't do it” and “no! he/she doesn't deserve that”. Ugh, I'm telling you. This is one of the best movies that I've seen this year!

4. There isn't a single boring moment.

10-20 minutes into the movie, I was still worried about it being boring. Don't get me wrong, every second of it was incredible. I guess I just expected the excitement to go away, but it didn't! The story flowed beautiful. It had me feeling something the entire time. I just wish I could have recorded my facial expressions throughout the movie. I was either had a smile on my face, tears in my eyes, or a worried look the entire time. There were so many moments when my boyfriend and I looked at one another in shock about what was happening on the screen. We were really into it!

5. My boyfriend loved it.

Yes, my boyfriend came with me for this one. He it open to seeing any movie because he knows that he might end up loving it – just like with this one! The first thing he said when it ended was, “Wow! That was a great movie!”.  We could not stop talking about it. In fact, we were still talking about it the next day. There was so much depth to the movie. There was never a predictable moment, never a ‘typical' scene. It was all beautiful, wonderful, and passionate. This is an incredible date night movie if your guy is open to dramas.

I really hope that all of you take the time to see the movie for yourselves. Don't pay attention to what anyone says – find out for yourselves. Walk into the movie with an open mind and a handbag full of tissues. You will smile, gasp, cry, and want to know more. If you're anything like me and haven't read the book, you'll walk away wanted to buy it. It's seriously incredible.

In the years following World War I, Tom Sherbourne (Michael Fassbender), a young veteran still numb from his years in combat, takes a job aslighthouse keeper on Janus Rock, a remote island off the coast of Western Australia. As the island’s sole inhabitant, he finds comfort in the monotonyof the chores and the solitude of  his  surroundings. When he meets the daughter of  the school’s headmaster, Isabel Graysmark (AliciaVikander), in the local town of Partageuse on the mainland, Tom is immediately captivated by her beauty, wit and passion, and they are soonmarried and living on the island. As their love flourishes, he begins to feel again, their happiness marred only by their inability to start a family, so when a rowboat with a dead man and infant girl mysteriously washes ashore, Isabel believes their prayers may have finally been answered. As aman of principle, Tom is torn between reporting the lost child and pleasing the woman he loves, and against his better judgment he agrees to let Isabelraise the child as their own, making a choice with devastating consequences. DreamWorks Pictures’ “The Light Between Oceans” opens in U.S.theaters on September 2, 2016.