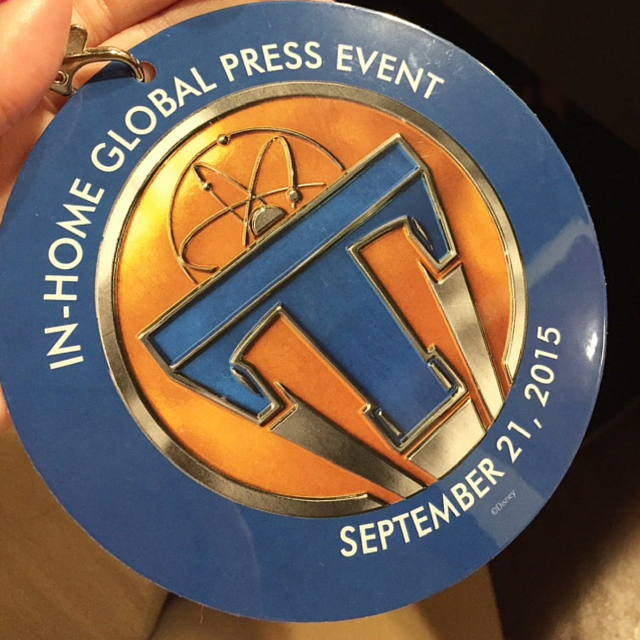 After watching Tomorrowland, I began to think about the dreamers of the world. Tomorrowland may just be a movie, but there is so much more to it. There are real thoughts and ideas behind the movie. There are real dreamers in the world just like Young Frank. Young Frank started as just a small boy with big dreams. He took those dreams and made them his life. He worked hard and he never gave up. After speaking with a couple of the Disney visionaries, I realized that they really embody the spirit of Young Frank. They had a wish, an idea, a plan. Each used their creative minds to build something that was never imagined before. They are the Disney Dreamers.

Part of my recent press trip to LA included interviews with two incredible Disney Dreamers: Charita Carter – Producer at Disney Imagineering and Mike Goslin – VP of Production and Content at Disney Consumer Products. We had the opportunity to chat with them individually for 15 minutes each. It was so fun and exciting to learn more about the masterminds behind Disney. Check out my favorite moments from my interviews below. 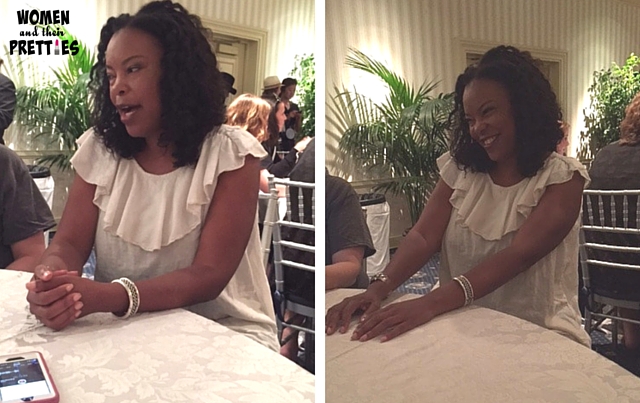 Q & A with Charita Carter, the Producer at Disney Imagineering

Chatting with Charita was so inspirational. She's a very humble and beautiful soul. Just being in her presence is relaxing and calming. She's a perfect example of someone who did what they thought they were “supposed to do” in life and ended up doing what they loved instead. She started as an accountant and ended up being a creator. It just goes to show you that every step you take can lead you to where you are meant to be. I hope you enjoy!

Q: What advice would you give to someone wanting a career in a creative field?

” Follow your passion and really get to know yourself. Get to know what really excites you and what really makes you want to wake up in the morning and then find people who are like-minded or are very encouraging. Get a support group of people, kind of like your cheerleaders who believe in you. It's very important to believe in yourself. You'll have those moments where you'll have doubts, so it's great when you're surrounded by people who say ‘you can do this'. I would also suggest to be very patient because it's great to have a goal and have an actual plan to do that.

But I, oftentimes encourage people to be open. Be open when new opportunities arise, especially in the Creative Field because a lot of what we do might not exist now and you could be the first person doing it. I often say dreams are wonderful because they motivate you and they contain your hope and they inspire you. But the real end game is your destiny. You want to find your destiny. You want to find that thing that you were put here to do.” 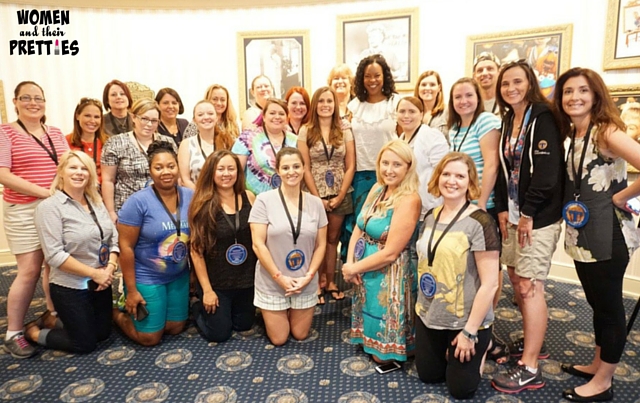 Q: As a kid, what did you what to be when you grew up?

“There's a number of things. The very first thing that I wanted to do was to be an Air Force Fighter Pilot. Didn't happen. I was an Air Force Grad and I was exposed to Air Shows. My Dad had a lot of Pilot friends too. And then it's interesting, the next thing I wanted to do was something that my Mom's Sister, my favorite Aunt, was doing. She was an Accountant and she never seemed to have a problem with money. You'd go to her house and you'd never have to as, can we afford it? It would always be like, what are we gonna wear to it? So I thoght Wow, this is really cool. So I pursued Accounting and once I got into Accounting, I had a vision of eventually becoming like a CFO of a very own lucrative, successful company.

I had no idea that I would never end up on the Creative side of the house leading Creative teams, leading Technology Teams. But I love what I do. It is quite the journey and you know, it's just one thing that led to another. Like I said, when I started with Imagineering, if you had told me I would doing this now, I would just have laughed at you. But if I look back, every experience that I had, has prepared me for what I currently do now.”

Q: You do a lot! How do you balance everything in your life all at once?

“You know what, that's a work in progress. I'm still trying to balance. I'm getting to a point where I think, maybe balance is overrated. A lot of what helps me is the way that I'm wired. I love doing things. I love doing stuff for the first time. That doesn't scare me, it actually excites me. I'm constant, it's probably my fault. I'm always looking for something new to do. I love to kind of write the manual and then hand it off, and then go and do the next things. Which is kind of sometimes the opposite of what you would think with Accounting, you know, I used to close the books if you will. You'd do that every month and you report. You knew what your days were going to be like.  And now day to day, it's just like OK, what are we doing today? And what does that mean? And I found that I can thrive in that environment. It's not for everybody, but I love it. 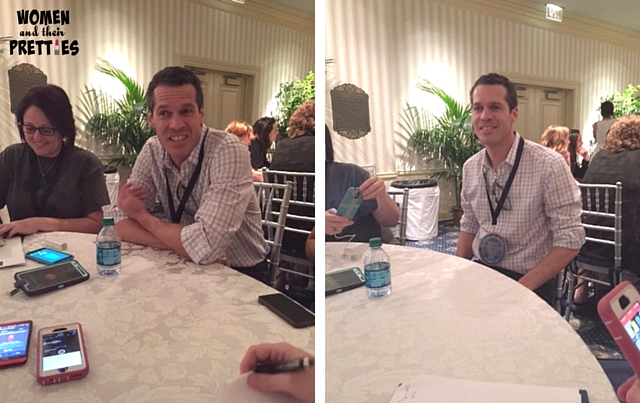 Q & A with Mike Goslin, VP of Production & Content at Disney Consumer Products

Mike Goslin is the brains behind Playmation – the next step in the evolution of physical play. He's quite the gamer and has worked on a ton of popular games including Toontown Online and Pirates of the Caribbean Online. He's also known for his work on the award-winning, Disney Quest at Downtown Disney in Orlando, FL. We got some exclusive info on the future of Playmation. Enjoy!

Q: The first thing we want hear about is Playmation?

“So, we’re basically taking old school play, and bringing it back into the 21st century using technology, and we’re telling the great Disney stories using it. Our first release is Avengers, so we’re using this gear to give you superhero powers in the real world. So, a kid will be able to put on Iron Man’s costume and battle a robot, physically. They’ll go across the room, and when he fires, he’ll feel a kick on his forearm and the audio will boom and the robot will shake and fall over, so it feels like you’re really firing a holster blaster! We’re going to build stories on top of that. So it’s a lot of devices talking to each other in a coordinated way to create a play experience in the real world. It's very much like living a videogame.”

Very active, so you have to use your imagination, there’s no screen required although, if you wanna expand the experience, you can download new content via an app. But it's all your imagination and running, jumping, and crawling. It’s very much like running around the yard, being physical and using your imagination.

We thought there was an opportunity because now with all this new technology you can wear it and go wherever you want. So, we want the kids running around, being outside, playing together – multiplayer. So it’s opened up new stuff to be available to kids.

Q: What's next for Playmation?

We’re rolling out Star Wars. So, Avengers is gonna be available in October everywhere and then Star Wars for 2016 and Frozen for 2017. So you can get to be a Jedi and then, learn ice magic!

Q. What age group is Playmation geared toward?

So we designed it for 6 to 12 year olds with really the sweet spot being seven, eight or nine years old. We made the wearables fit adult arms and also really young kids with really tiny arms. So we think everybody’s gonna play with it! 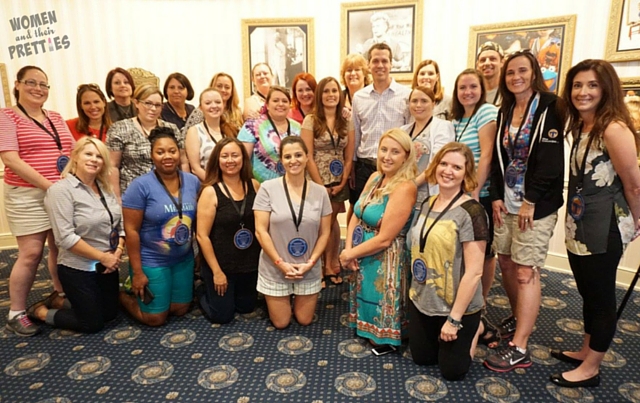 Q. Will you be able to play like Frozen and Star Wars together?

So, yeah here’s the thing, we’re not gonna tell a story that has Elsa against Darth Vader, we would never tell that story, but this is kids and we wanna empower them right? Part of our goal is creating an empowering experience for kids, and so we get out of the way. If they wanna create their own epic stories, we let them. It is possible for them to play together if they want to. Kids are going to do what they want to do.

Q. Can two players have the same powers, how does that go?

Oh absolutely. It becomes personalized, though, so pretty quickly you diverge, so there are 40 different abilities that you can unlock through play, as you level up, you become more powerful like an Avenger. Plus you may have done different things and have different experiences, so if we’ve both been playing, we won’t be exactly the same, we’ll be a little different. And the story is that you’re not Iron Man. We’re each armored superheroes but, you have your own backstory basically.

It’s really important to include girls too so, you don’t have to be Iron Man, you can be your own Iron superhero, and Jarvis addresses you as Avenger not sir. We really wanted to include girls, ‘cause they wanna be superheroes too.

Q. What advice would you give to young, inspiring kids that want to invent games?

I’ve had to use everything that I’ve learned in my life. I had a psychology degree and art in college. I did art all through my childhood. I was inventing stuff in the garage, building forts before there were virtual environments. I've used history, art, English Literature, you know, both technology and art and creative altogether. So, you can specialize and contribute but  it all comes from foundation of learning so, take all those classes, read a lot, play a lot of games.

I hope that you all learned so much. Playmation is now available, so pick up your Iron Man piece this month. In November the Hulk hands will be available! Tomorrowland will be released on Blu-ray™ Combo Pack, Digital HD and Disney Movies Anywhere (DMA) October 13, 2015.
Disclosure: Women and Their Pretties was compensated for this post with an all-expenses paid trip to LA to the #AladdinBloggers #TomorrowlandBloggers & #Disneyland60 press event. All opinion expressed here unbiased and my own.

29 weeks pregnant and trying to stay motivated to

A little late in the day but we’re #halfway2hall