It seems like just yesterday that I was at Skywalker Ranch getting a sneak peek at the highly anticipated Rogue One: A Star Wars Story. It was by far the most magical event I've ever attended. I even got to chat with the cast! I thought that nothing could add to that experience. I felt like I saw the ins and outs of Rogue One that nobody would ever see. Then the Rogue One Blu-ray shows up at my door (thanks Disney) and again, I'm in awe.

First, I want to remind you that it will be available for everyone to take home on April 4, 2017. So be sure, to grab it on Amazon.com or at a store near you! Amazon's always the best deal though. 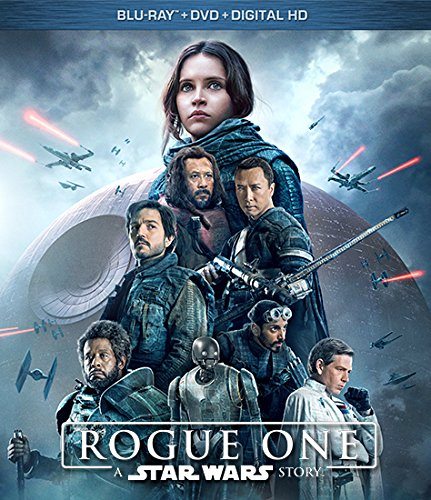 GET “ROGUE ONE: A STAR WARS STORY” EARLY ON MARCH 24TH

on Digital HD, and on Blu-ray April 4th

at the stories behind the first Star Wars standalone film

BURBANK, Calif. (Feb. 22, 2017) — Lucasfilm’s “Rogue One: A Star Wars Story,” the first of the Star Wars standalone films, has established its place within the Star Wars universe and the hearts of moviegoers, becoming the seventh highest-grossing film of all time in the U.S. Fans can own the epic action-adventure thriller — nominated for two Academy Awards® — early on Digital HD and Disney Movies Anywhere on March 24, and on Blu-ray™ Combo Pack, DVD and On-Demand on April 4.

Never-before-seen “Rogue One” bonus material will take fans behind the scenes with the movie’s diverse, dynamic cast and inspired team of filmmakers. An intimate collection of stories reveals how the film came to life, as well as hidden Easter Eggs and film facts that audiences may have missed in the theater.

Rogue One Blu-ray Bonus features include*:

“Rogue One: A Star Wars Story” is directed by Gareth Edwards (“Godzilla,” “Monsters”) and produced by Kathleen Kennedy, p.g.a., Allison Shearmur, p.g.a. (“The Hunger Games: Catching Fire,” “Cinderella”) and Simon Emanuel, p.g.a. (“The Dark Knight Rises”). Veteran ILM visual effects supervisor John Knoll, (“Pirates of the Caribbean: Dead Man’s Chest) whom shares a long history with the Star Wars films, is executive producer alongside Jason McGatlin (“Star Wars: The Force Awakens,” “War of the Worlds”). The story is by John Knoll and Gary Whitta (“The Book of Eli,” “After Earth”), and the screenplay was written by Chris Weitz (“The Golden Compass,” “About a Boy”) and Tony Gilroy (“The Bourne Legacy,” “Michael Clayton”).

The music is by composer Michael Giacchino (“Star Trek Beyond,” “Zootopia”), with original Star Wars music by John Williams. The editors for the film are John Gilroy, ACE (“Nightcrawler,” “The Bourne Legacy”), Jabez Olssen (“The Hobbit” trilogy) and Colin Goudie (“Monsters”).