We talked makeup, strong storylines, & being part of the Marvel family with the women of Guardians of the Galaxy Vol. 2. We interviewed Karen Gillan. Pom Klementieff, and Elizabeth Debicki at this incredible event. This unbiased post is sponsored by Disney as a part of the #GotGVol2Event! 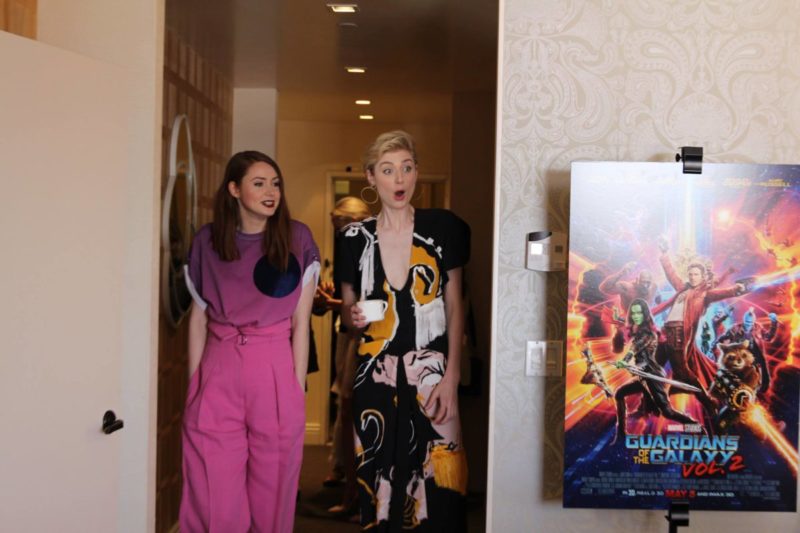 With the recent uproar in Hollywood about equal pay for women, I was really concerned for the industry. I was worried that women weren't being treated as equally as men. The selfish side of me was also worried about losing some of my favorite female characters, like Gamora. That's why I was so thrilled to see a cast full of women. It's not often that we see this is such a male-driven genre, but it's Disney and Marvel, so anything could happen. And it did. 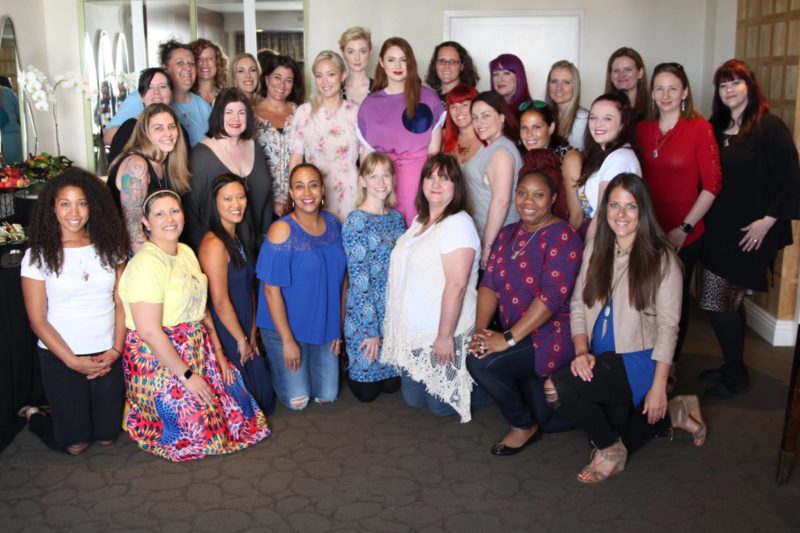 Interview with the women of Guardians of the Galaxy Vol. 2

I was really impressed when these 3 ladies walked into the room. I love group interviews, but rarely see a group of women together. It's fun and really empowering to watch these hardworking ladies feed off of one another, laugh together, and relive some of their favorite moments. It's quite apparent that they are really proud, well-respected, and excited about their part in Guardians of the Galaxy Vol. 2. And they have every right to be considering how incredible the film is. So here's our interview with Karen Gillan. Pom Klementieff, and Elizabeth Debicki – the women of Guardians of the Galaxy Vol. 2 (minus Zoe Saldana).

Listen, we're a group of women chatting with another group of women – obviously the subject of makeup is going to come up. Just by looking at the character photos you can see how incredibly elaborate the makeup is. Just look at Mantis with the those antennas, Ayesha with her incredible costumes and full body makeup, and Nebula – my goodness! She literally looks inhuman. It's unbelievable that she's not full on CGI, haha. We just had to know how each character's makeup process was. 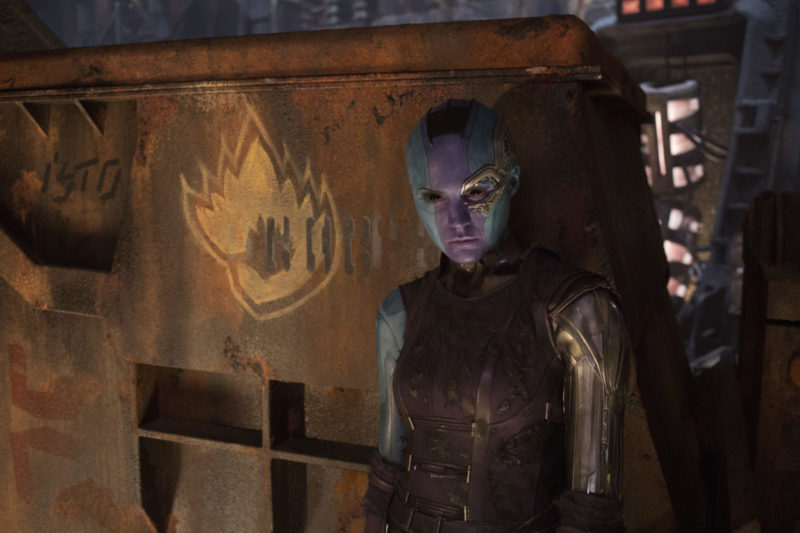 “It's kind of intense and slightly claustrophobic. It's definitely becoming part of my ritual, in terms of like getting into character. One time I did a rehearsal without the makeup and I did not feel like her at all, so it's sort of become like a vital part of the process for me.”

I have to comment on how incredible Karen is. There's something so cool about her. She's a total tomboy but is all about girl-power. She really gave us a memorable interview. 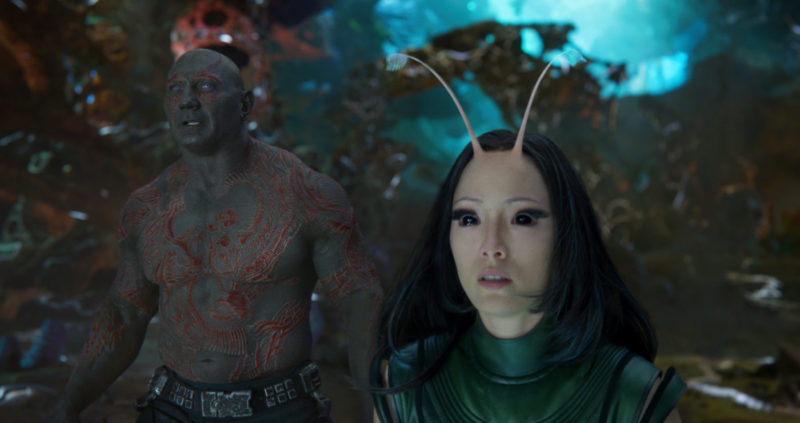 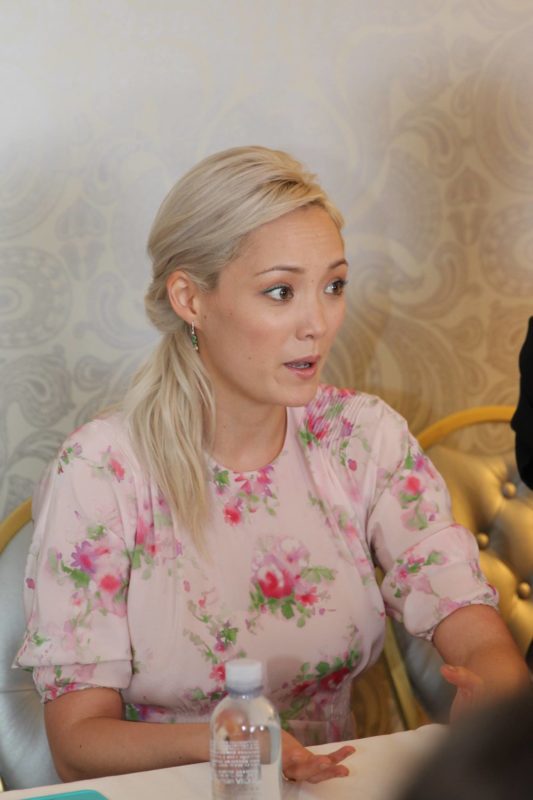 “It's like there's no white in my eye almost. I feel kind of claustrophobic. I have tunnel vision, so it makes me feel like I'm in my own world, which is kind of good for the character, too. The antennas, I kind of forget about them and people are like, “Oh you have something weird on your forehead.” But me, I'm just like yeah, whatever.”

Pom is the cutest and most innocent woman I've ever talked to. You feel like she's so delicate and dainty. Her smile and laughter is completely contagious. She's adorable and I is going to do big things! 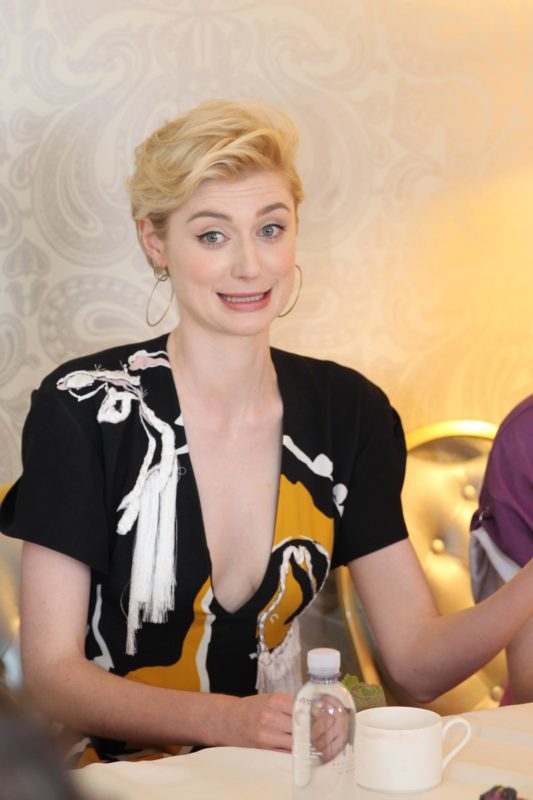 “The most time consuming and hectic part of Ayesha is the costume and that gold dress is almost entirely metal. It weighs so much. It takes about three women to put on. We used to call it the Ayesha Taco because the whole bottom of the dress is like a great big circular metal thing and they would fold it up like a taco. Then, I would walk up the stairs. And wherever I get placed, that's where I am for the day. Someone said, “what does it feel like?” I said, it feels like a small child is hanging onto my back. The bustle is so huge. But it informs who you are and how you feel. The choice to be that creature and the presence she wants to put out into the world is so much the hair and makeup and the costumes.”

We definitely got a laugh out of her process. Just thinking of her being “placed” somewhere is so funny! 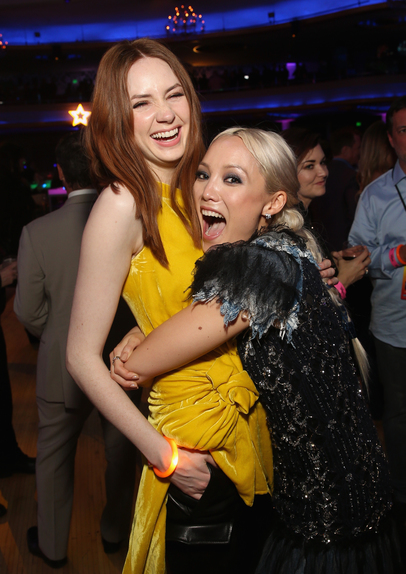 Guardians of the Galaxy Vol. 2 World Premiere After Party 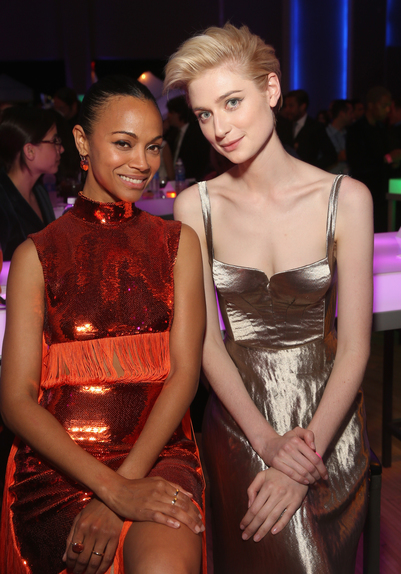 Guardians of the Galaxy Vol. 2 World Premiere After Party

These women are taking a huge leap with these roles. Every woman and parent is looking for them to deliver the right messages to their children and young women. So, what would they really like an audience to take away from these roles?

It's okay to be imperfect and not be like everyone else- to just be weird sometimes. That's what makes you interesting. 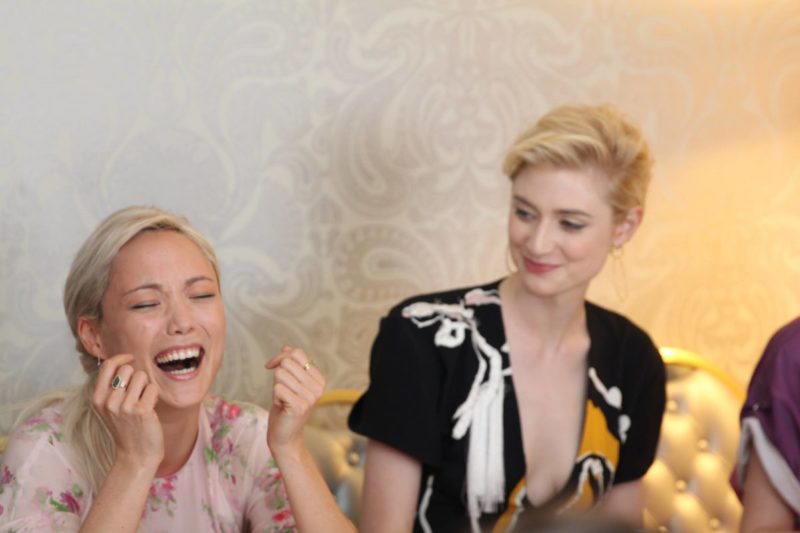 Elizabeth jokes by saying, “Don't be like Ayesha” but really she has very good qualities that can be admired by many.

“I think the thing about Ayesha is she is very justified in what she's doing. I think she's very strong. Maybe her strength. What I like about her is that she isn’t perfect, she's actually quite fallible. The irony is they're genetically modified to be perfect and she's extremely imperfect, so I would say you could look at Ayesha and then decide to be compassionate.” 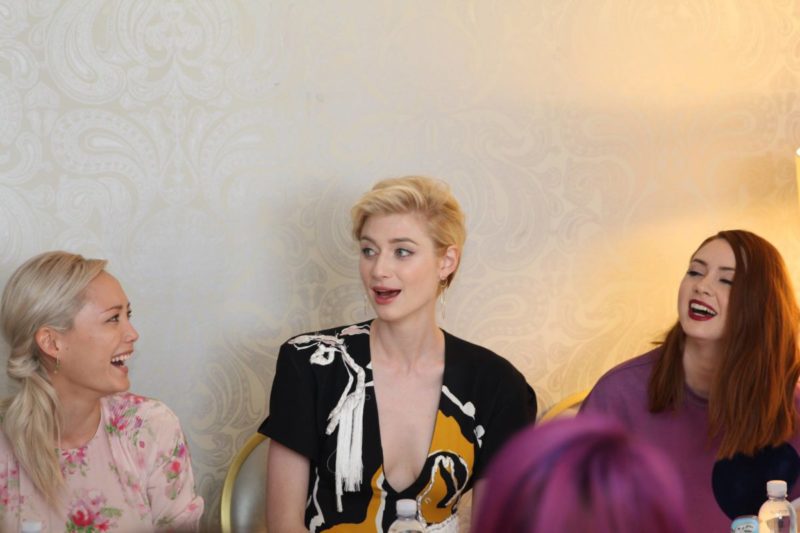 Karen commented on the character of Ayesha saying, “I like seeing a woman in a leadership position. A woman can absolutely be the boss!“

Being part of the Marvel Universe

Being part of the Marvel Universe must literally feel like being in a completely different Universe. The fans are devoted like no other. They know the story better than the actors do sometimes. Many fans have read every single comic, multiple times. They know every character, every characteristic, and every single storyline. It must be wild and at times, very intimidating. Being Nebula, Karen in particular has a huge fan base. She told us what she really felt about it:

“It's such a cool sensation to be part of something that people actually care about because that's not always the case. Usually you're trying so hard to just make people care about your project. But with things like Dr. Who and this, I mean it just has this built-in fan base. They're just so accepting and they're so passionate. They just care about all the decisions you make and you just feel like really special for a second.”

Elizabeth talked about how privileged she feels to be a big part in such a huge Universe. 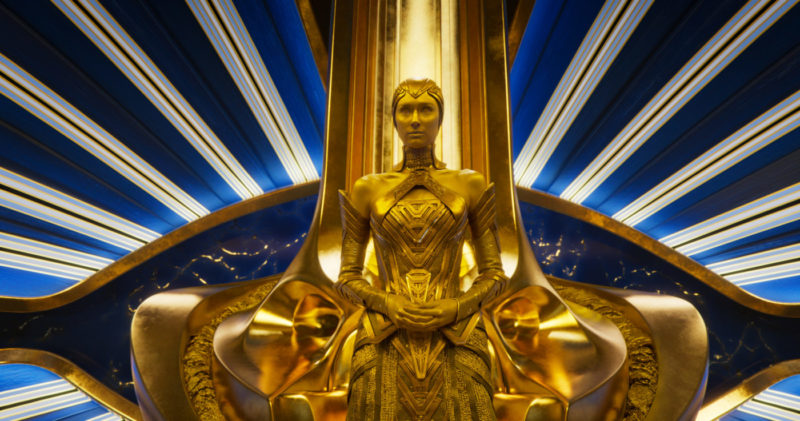 “It's actually a huge privilege as an actor, to be a part of something that people really want to see and that they care so deeply about. It's rare in life to be a part of something that people love so much and they care so much about. Strangely enough I wasn’t really nervous about watching the film or being there last night, usually I get very nervous. But I just sort of knew that it was going to be accepted with such love.”

Pom is even more proud to have been a part of a James Gunn masterpiece, “It's not just a Marvel movie. It's a James Gunn!” I love her appreciation for his work, because he manages to turn everything into gold. And not, that's not an Ayesha pun. Or maybe it is. Pom Klementieff elaborates: 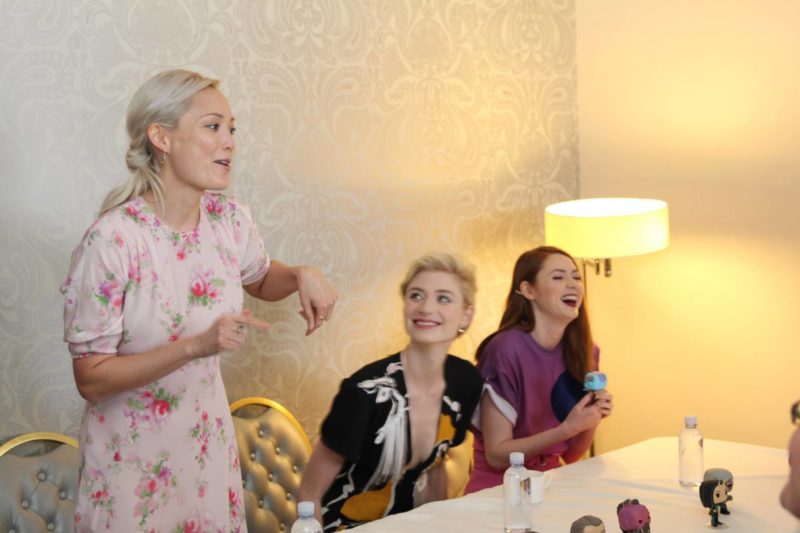 “I think he's such a genius. And he really reinvented the super hero movie. He made it something really human. And it really talks about family. There is action. It's also hilarious, and it's also so moving and heart breaking. It's so many things at the same time. And the music is just hah yeah I remember this music and then some of the stuff, you're like, oh I have to look it up. I mean it's so many emotions and I think it's really special.”

More Mention-worthy moments from this Women of Guardians of the Galaxy Vol. 2 Interview