Get an exclusive storytelling by Star-Lord himself about a brand new adventure in this Guardians of the Galaxy Vol. 2 Chris Pratt interview. This unbiased post and galactic adventure is sponsored by Disney as a part of the #GotGVol2Event, obviously.

I sat in the interview room, impatiently waiting for Star-Lord himself to walk it. Yes, we're talking about the gorgeous, talented, and hilarious Chris Pratt. Like, no big deal. It's totally normal to sit down with the man America labels as the boy next door, the man who helped bring my favorite Marvel film to life. I mean, just look at him in this featurette! 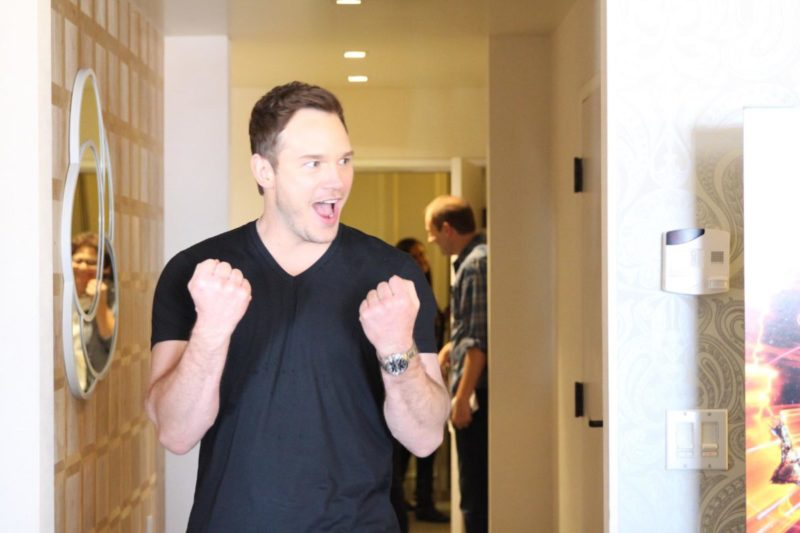 Chris Pratt, Star-Lord, Peter Quill walked in and we all applauded at his incredible performance in Guardians of the Galaxy Vol. 2. He immediately yelled, “Mommy Bloggers!” Which had us all fangirling, even the not-so-mommy bloggers (a cat mom should count, right).

He gave us a huge smile on his perfectly sculpted face – yes, it's just as perfect in real life as it is on the big screen. He was enthusiastic and ready for the official Guardians of the Galaxy Vol. 2 Chris Pratt Interview!

Chris Pratt immediately asked if we all liked the movie. Obviously, we all loved it. He talked about how he read the script and loved it, but there are a lot of moving parts so he wasn't 100% sure exactly what made it into the movie. “I was just relieved to see that the movie was as good as the script.” It must be kind of scary as an actor to work so hard, for so long and to leave everything you've done in someone else's hands. But with a director like James Gunn, I bet it's much easier to let go of control. 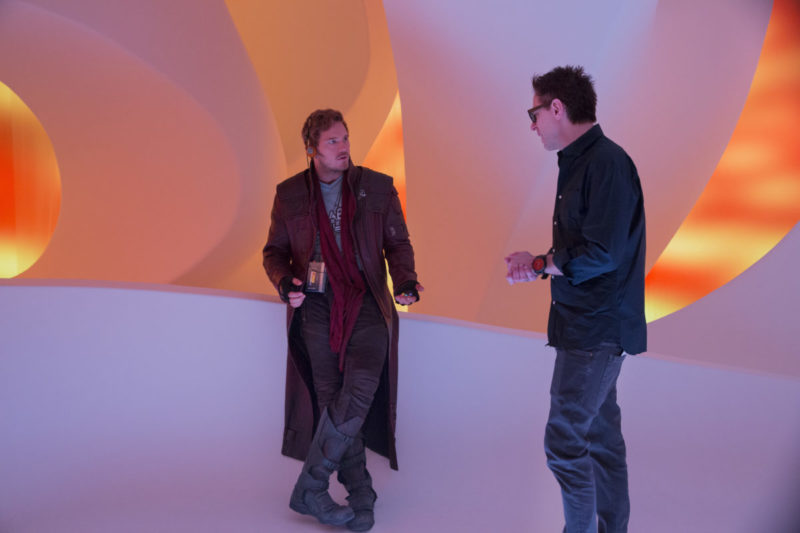 James Gunn sits down with Chris to tell him the entire story of Vol. 2 before he told anyone else.

I just have to say that James Gunn must be really passionate about his work and his actors because he sat down in his home, with Chris, to tell him the entire story before anyone else.

I was the first person to hear it. And, I’m crying at the end. And he’s like, “So, what do you think? Would you?” He was asking if I was willing to go there And I was like, “Are you crazy? Yes. please, it’s amazing!”

Since Chris said that James told him about  Vol. 2 almost immediately after the first one, we had to know if he'd heard anything about the second!

He hasn’t told me the whole thing, but I’ve got some of it. I know some of it. 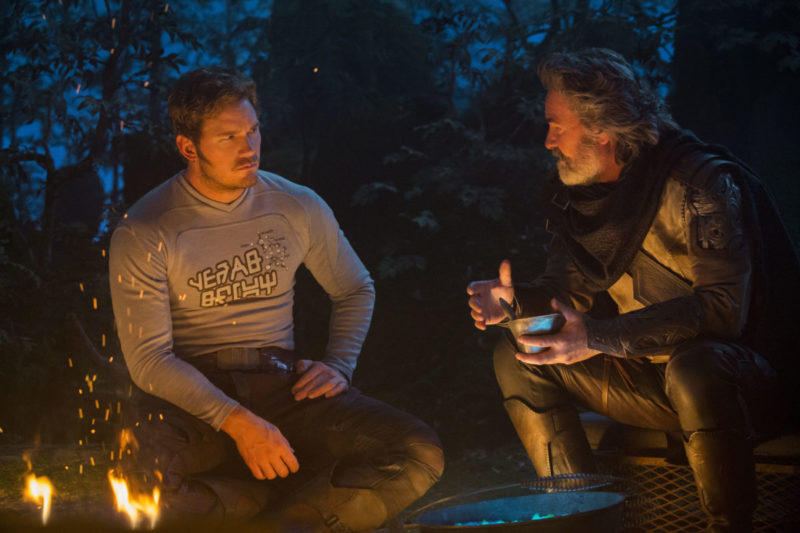 Boy, did we want to go off on a rant about the 3rd one. I'm sure Chris wouldn't have said a peep, though. Next we had to talk about the one thing everyone needs to know – what is it like to work with the man, the myth, the legend – Kurt Russell.

So, what was it like for Pratt to work with someone he's already a huge fan of? It must be difficult to remain composed when you're freaking out on the inside. Chris explains his little trick for working with actors he loves:

Obviously he’s this iconic dude who I’ve known about for decades before he ever knew I existed. There’s always that strange moment when you meet someone and you’re a big fan. You feel like you have to tell him, because otherwise you try to build a friendship and it’s a little inauthentic. You just say, “Listen, I have to get this part out of the way, but I love you so much. Oh, you’re the best! You’ve always been the best!” And he says, “Yeah, I know. Thanks.” And, all right, let’s get to it! 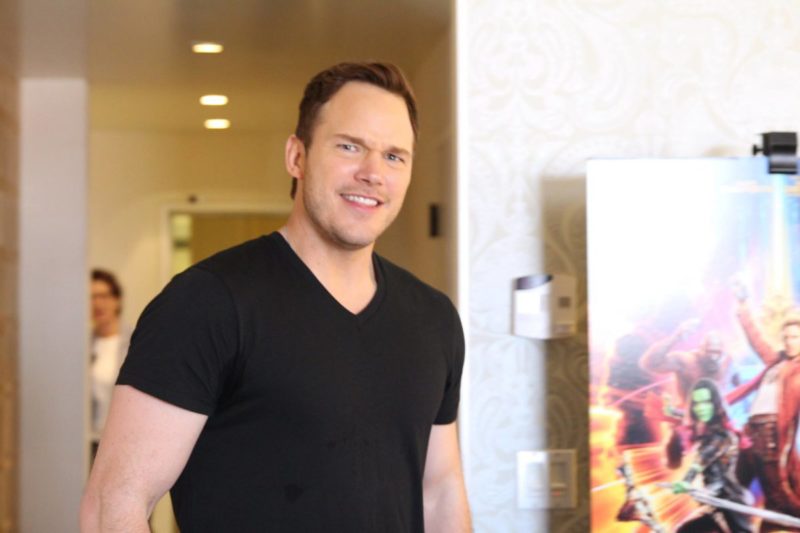 How does Chris Pratt really channel his anger?

Chris doesn't seem like an angry guy. He's always laughing, joking, and seems to really be enjoying his life professionally and personally. So, how does a man like this channel his anger for a role like this? Yes, you'll see Peter Quill's anger side in Guardians of the Galaxy Vol. 2. It definitely seems authentic.

Thank you for that. For me as an actor, one of the hardest things for me to do is channel anger because I do it so rarely in my real life. I think often times, how we behave in the real world is really easy to do as an actor,  for me at least.

Chris then talked about a certain scene that I will not discuss and he talked about how difficult it was for him to portray an angry character. However, he had a tick up his sleeve. It was a trick that totally makes sense, but I think only the most talented actors could pull off as well as he did:

Then you can’t use the natural empathy for your character that you’re playing, that you love, you have to have empathy for them, and then you feel their emotions.

I mean, I definitely felt empathy for all of the characters in this film. But again, I'm a lot like Mantis when it comes to being empathetic. 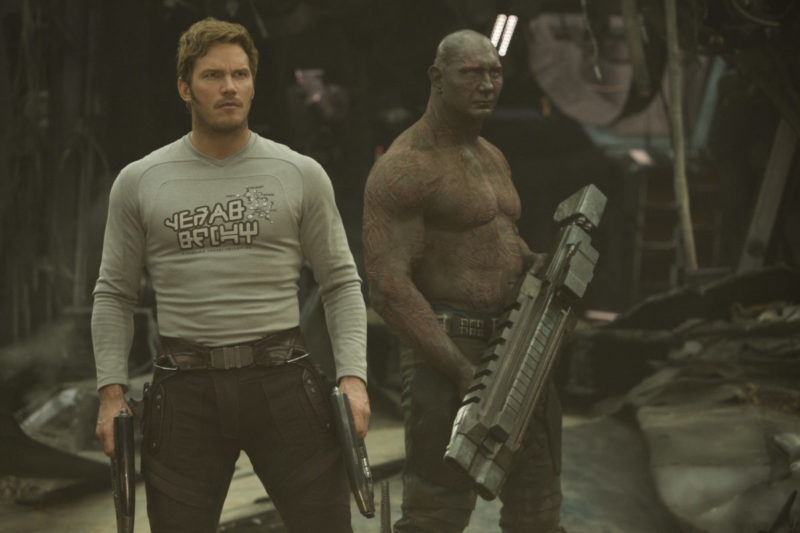 Guardians Of The Galaxy Vol. 2..Ph: Chuck Zlotnick..©Marvel Studios 2017 (Check out that shirt!)

So, Chris does this “What's My Snack” series on Instagram that all the kids (and everyone else) absolutely love. It was only right that we ask him what his favorite snack is verses what Peter's is. Do they have a similar taste?

Peter Quill’s shirt in the movie, that’s his favorite snack! That’s actually a label from, this little Easter egg from the first movie. There was some candy on the table and I think I’m eating some of the candy. I don’t know if that ever made it in the movie, but James really loved the label, the art department had gone the lengths of creating this language, and created a label for some candy. And so, he put that label on the shirt. So, that’s a snack that Peter Quill likes to eat.

I must say, I felt a little special to find out that Chris and I had the same favorite snack. If we ever decide to be friends, I totally know what to serve at dinner parties. I know, I know – I'm dreaming right? 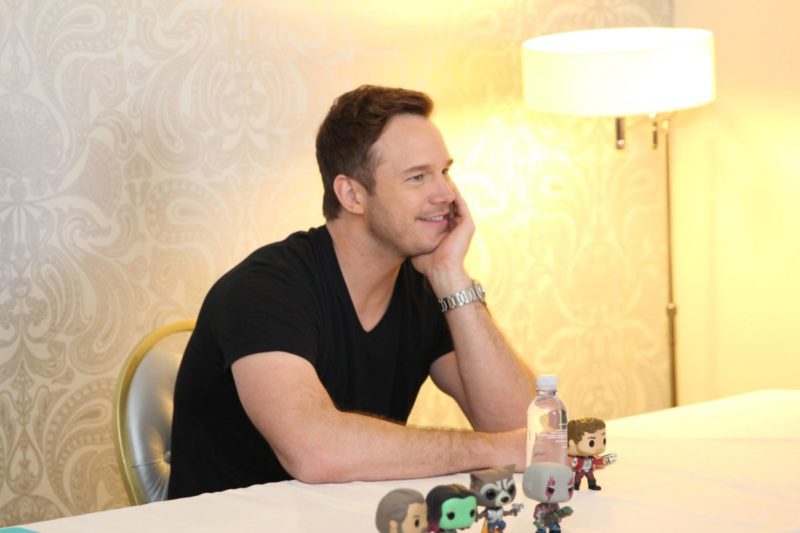 Okay, Chris clearly has a very beautiful and sculpted body. I think we all dream of being in shape like he is, but guess what? He's not as perfect as we might think!

Well, if I’m gonna be fully authentic, I’m pretty careful about when I reveal myself to the public. So, I do it in a way to make you think that I’ve kept it off the entire time, but I haven’t.

Basically, he really pushes himself before a photoshoot or shirtless scene, but he doesn't live his life in a way that's strict and miserable. He enjoys his snacks and still makes it a point to enjoy himself, but doesn't eat too unhealthy either. I must say, I am not big on fitness at all but I walked away feeling inspired by his advice for anyone trying to reach their fitness goals:

So, don’t be hard on yourself if you can’t lose weight and can’t keep it off. That’s really natural. The best way to think about it is not to have like a weight goal. 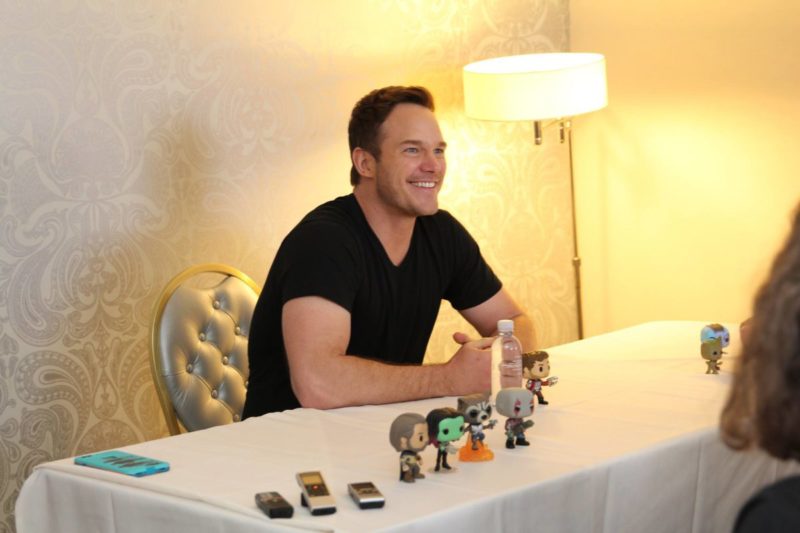 Final mention-worthy moments from the Guardians of the Galaxy Vol. 2 Chris Pratt Interview

I'd be here forever if I told you every single thing we talked about with the gorgeous, Chris Pratt, so I'll just leave you with a few final moments that are worth mentioning.

“You don’t have to be present to be a presence.” 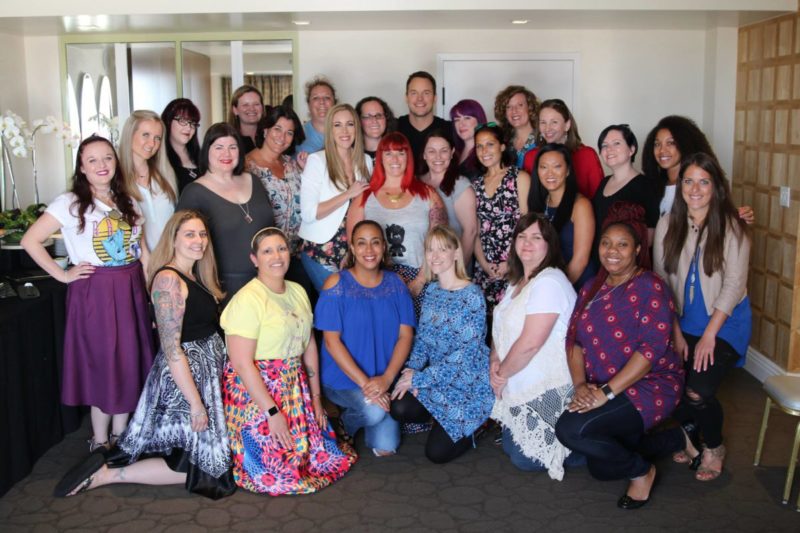