It's official! I'm pregnant with my first child. I wrote this post before the world knew I was pregnant and now I want to talk about my first trimester journey as a way to document my pregnancy. 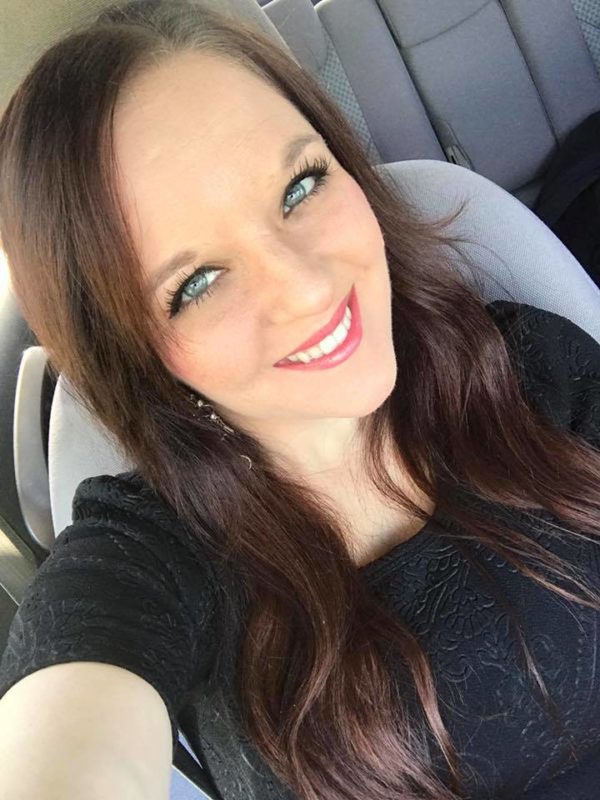 A “glowing” photo taken during my first trimester when I was still hiding my pregnancy.

“I think something is seriously wrong with me,” I thought as my menstrual cycle decided to do funny things. I've always had an irregular menstrual cycle. Some months Aunt Flo would show up a week late, other times a week early. I kept track of my “regular” cycle by my friend's. Hers was always the same time, every month so I knew when mine was off.

This time, my period wasn't just late or early. It was weird. I had my period for an entire day and a half. Then, I was spotting. The menstrual cramps were still very much there. I didn't think too much about it in my first week, but as the second week was coming to an end, alarms started sounding in my mind. “Why do I still have these hateful cramps?” I was more frustrated than anything. I decided to do what any concerned young woman does. I searched my symptoms on Google.

Eh, not so obvious. Google always jumps to conclusions so I literally didn't even consider pregnancy as a possibility cause of this unusual behavior of my 20-something, Bride-to-be body. After all, we weren't trying to have a baby. We weren't necessarily preventing it either.

So, I went on with my life. I ran errands, worked til the wee hours of the morning, ate very bad foods that baby would not approve of, and traveled. All with cramps and occasional spotting.

I took a flight across the country to attend the Ultimate Disney Fan Event, the D23 Expo. By the time I arrived, my feet were swollen and my exhaustion was very apparent. Nonetheless, I took the event by the horns. I woke up early each morning to Disneybound at the expo. I stayed out late each night to make the most out of my time at Disneyland. Yes, I rode rides and drank caffeine (I'm kicking myself now).

I even remember walking into the park one day, feeling the cramps. Again, I thought to myself, “I think something is wrong with me. I'll ignore it until I get home. I'll just enjoy this trip and try not to get too concerned.”

It's important to note that I'm a Stage 4 Worry Wart. I have a pain, I think it's a serious, life-threatening illness. In this case, I was afraid that something was wrong with my lady parts and that I was going to go to the doctor and find out that I couldn't have children. Yes, it's crazy to think about now. 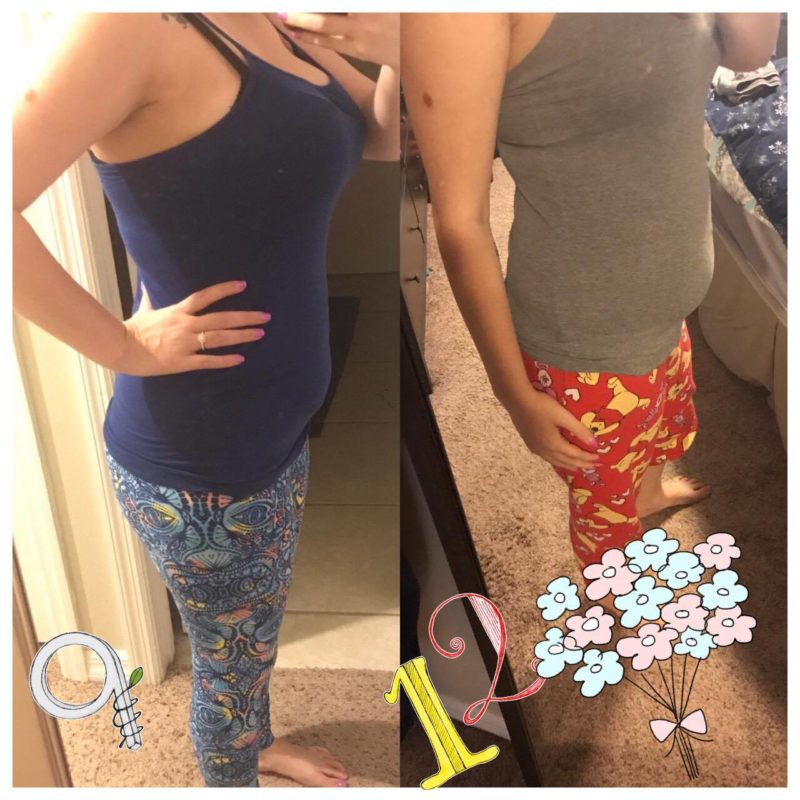 I remember ordering room service each day and forcing myself to eat because all the food was making me gag. I thought I was crazy. My exhaustion was severe by the last day of the event. I could barely contain myself. I wanted to collapse. I was so confused and felt like I'd really dropped the ball at this event. I've had much longer, more eventful, chaotic days in my life (believe it or not) and I'd never felt this exhausted and unmotivated. I was just disappointed with my body. I'm a non-stop kinda woman when I have a little caffeine in me. I thought I was just in a funk.

As I prepared for my very long red-eye flight home, I promised myself I'd drink some coffee and work until my eyes couldn't handle it anymore. Ha! My body had other plans.

I was sick for the second half of the flight. My stomach was nauseous and I couldn't do anything to make it better. I ate Pepto tabs, drank ginger ale. It wasn't letting up but I still didn't find it to be a “sign”. I'm not the best flyer, especially on an overnight flight. So I put it off as that.

Two days later, my symptoms were still very apparent. I fearfully confessed to my friend that I was really worried because I'd been cramping and spotting for 4 weeks now. I told her that I'm afraid I can't have kids and blah, blah, blah.

“Omg! You're pregnant! I just know it! You need to take a test!” She always thought I was pregnant because that's her wish, lol. So I didn't think much of it (clearly I was really lax about all of this). When she told me that she had the same symptoms with both of her pregnancies, I decided to order some pregnancy tests on Amazon. Again, I want in much of a hurry but I thought I'd do it to appease her and to mark that off the list of possible causes.

The tests arrived two days later (Amazon Prime is my hero). I woke up that morning and didn't run to the mailbox. I did my morning routine and even peed (even though I knew that's the best urine for a PT).I knew my tests were in the mail because Amazon sends me text alerts, but I wasn't in any sort of hurry to get them.

The afternoon rolled around so I decided to make my way to the mailbox. I came inside and decidedto go ahead and take a test. I had very little urine on the stick and nothing was happening so I thought about throwing the test away and trying again later.

A few seconds went by and the screen popped up with one line, on the left. I thought it was off because I've taken tests before and the one line is always on the right, but whatever. And then, the second line appeared. As clear as day. Two bold red lines.

I said those words out loud over and over again. And then, I searched Google.

Google results: it's very rare for a pregnancy test to show a false positive.

Universe: told ya so.

So, I chugged glasses of water and took another test.

Two red bold lines, again. “This is actually happening! I can't believe it!”

I called my friend (who told me to take the test) and told her the good news. “Oh my gosh!! Yay! I'm so excited!!” And we talked for an hour about my concerns, complete shock, and ideas to announce it to my fiancé who was at work all day, oblivious to the fact that his life was about to change forever.

I waited anxiously for him to come home. I wrote “You're going to be a Daddy!” And taped the 3 tests on the dry erase board (I had to take 1 more).

“Yes you are! Baby, did you not see the 3 pregnancy tests?”

“What no?” And so he looked again.

“You need to take another one,” he said. No honey, I took three already lol. He asked one more time “Are you sure?” And then the excitement kicked in.

He hugged me and kissed me, as he continued to relive his shock. We talked about how everything was going to change and about our wedding and then we called our closest friends and family. 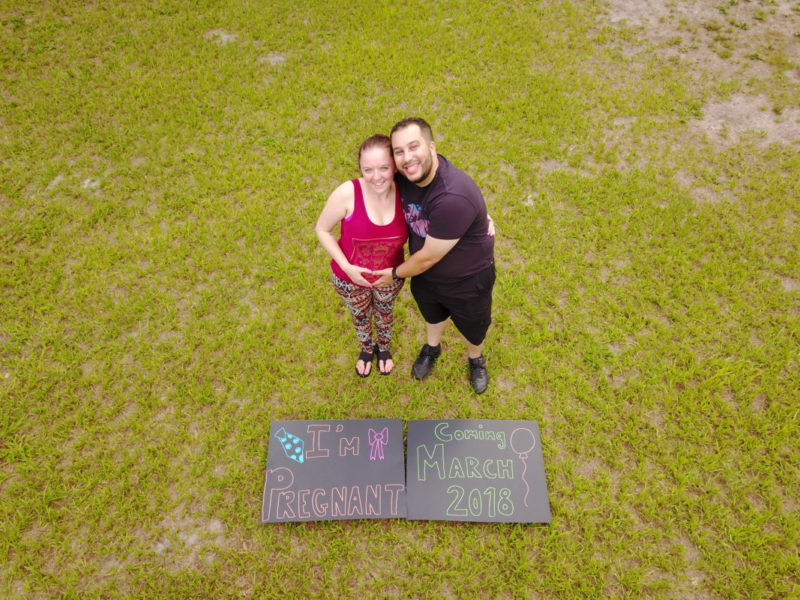 Our pregnancy reveal photo taken in the first trimester but not announced until second trimester.

Thank you everyone for reading about my first pregnancy! We're so excited to have your continued love and support as we partake on this grand journey. You'll be seeing a new motherhood column on Women and Their Pretties right away! Have any tips for first time parents? Tell us in the comments below!

I know you're dying to find out the reactions from friends and family after hearing the big news – so tune in for my reactions post, coming soon!