About a week ago, a group of bloggers and I embarked on an experience of a lifetime. We walked the red carpet for the world premiere of The Jungle Book. Little did everyone know, a few hours before that we got to meet and interview some of the incredible cast (and director) of The Jungle Book. Of all The Jungle Book interviews, the one with Lupita Nyong'o and Giancarlo Esposito was definitely the most personal. They gave us honest and very personal stories about where they drew inspiration from for their roles as the wolves, Raksha (Lupita) and Akela (Giancarlo). I think it's fair to say that these family-oriented actors were partially chosen based on their strong family values.

Giancarlo began the interview by telling us that neither of them had seen the completed film yet. Giancarlo lovingly tells us “we want to see it together as a family.”  I personally felt that the statement set the tone for the rest of the interview. It was easy to see the love and respect that Giancarlo and Lupita had for one another. It's that true emotion that really helped an audience to connect with the wolf pack. 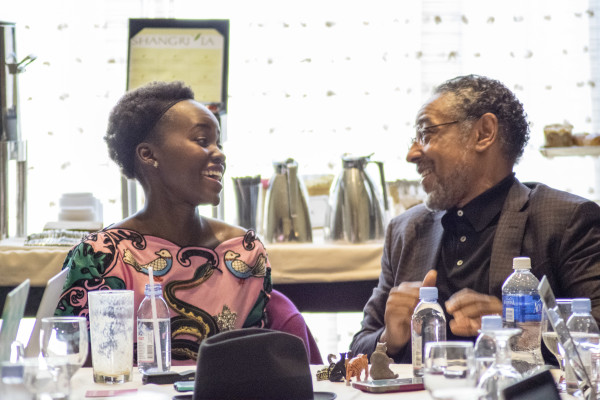 Being that she isn't a mother herself, we were curious as to where Lupita drew inspiration from for her role as the mother wolf, Raksha, in The Jungle Book. Any other actress may have just told us that they had a wonderful mother that they thought of while recording, but Lupita isn't just any other actress. Lupita was very open and telling in her response.

I have a lot of very, very powerful women in my life. My mother being the first. And most important. But in my culture, my mother’s sisters are also my mother. And my father’s sisters are my mothers, too. So I’ve had many mothers. And my Mom, she had a fierce love. She has a fierce love for her children. And she’s known to say things like ‘if you die I’ll kill you'.

For me, that spirit, that tenacity of mothering was something that I thought of and that inspired my version of Raksha. It takes a woman with one huge heart to take on, not only a child that’s not hers, but of a completely different species. And the fact she does it and doesn’t look back, and she does everything in her power to protect that child. And then to have to let go of that child as well, that takes even more love – to allow your children to do what they need to do. And all mothers go through that. I know, I went through that with my mother. And as a child, you don’t appreciate it until you’re much older. So those were things I was definitely thinking about. And I love my mommy.

Isn't that a beautiful response? With an entire room, mostly filled with women that are mothers, I think her response really reached out and touched our hearts. Her response had us wondering about what drew them to their parts as Raksha and Akela. 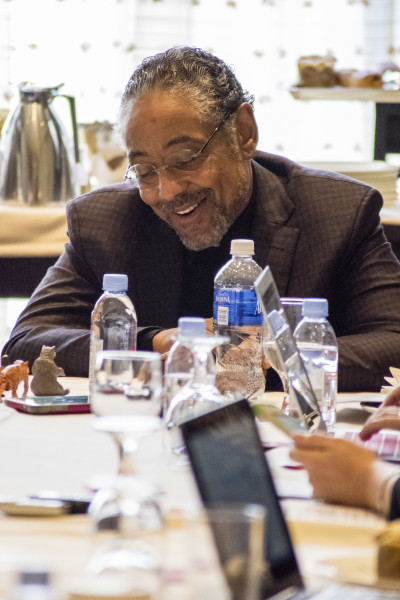 Giancarlo had a fun story about speaking with Jon about a year and a half before they officially decided to create The Jungle Book. They got to talking about the actual The Jungle Book book and Jon said, “wouldn’t it be wonderful to do this movie again and re-envision it for a new generation?” and it's all history from there! Isn't it funny how a seed is planted and how it can blossom into something so beautiful? It was truly Giancarlo's respect for the author, Kipling, that drew Giancarlo to the role!

I was really moved by Kipling because of his background. Where he was raised. He was born in India and he was raised through that caste system that… He’s an Indian in London and this story was such a story of freedom, yet in music, in jazz music, they say there’s no freedom without time. You can’t be free without time. There has to be a parameter, a meter to measure to be free within! And that makes me think so much about the particular time of this book. There was so much going on in the world. So that’s how I got involved! To be able to be in this particular story, which is told in a new way, with more eminent danger, yet with a great deal of compassion and understanding for the world which it’s placed in – Jon asked me and I said yes! 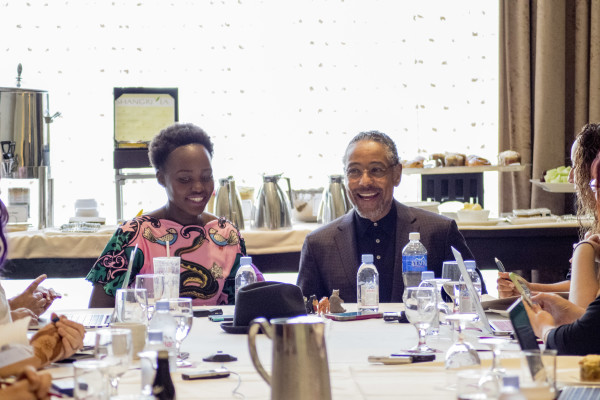 During The Jungle Book interview, Lupita explained how she's wanted to be a mother since she was like 2 years old, so she jumped at the chance to take on a mothering role.

“I also had a kind of fear about being a mother, and doing work like this makes you really put yourself there. I like being put in those kinds of uncomfortable places that help me to expand my empathy. And that was what attracted me to Raksha.”

Giancarlo admits that he was very connected, not only to the character that he voiced, but to Lupita's character. He really opened his heart up about what he think the mothering role has in today's society.

The importance of the female and the mother presence in our society is greater than ever. Motherhood is very deep. It starts when you’re very, very young. Now, my 12 year old comes in, wants to put me to bed. And she’ll put her hand on my forehead and say the prayer with me. As for years, I’ve done for her! It’s almost like a very beautiful, natural transition.

So while Lupita and you guys have been talking back and forth about motherhood, I have this vision that I’m really watching each one of my daughters start to become women, and mothers. And this is what’s gonna save our planet. I know it. Because there’s such a grace and understanding in the female persona when women have really come into their own. Part of that is to have children, and to be caring for those children, and not only in the care for them, but also in the nurturing and raising of them, they have to pass on their souls, and their intelligence.

And all those things can’t be taught. It’s something that, that in the essence of a woman, the essence of a mother, a mother knows! It's the strength of the mother that is going to change the way the world is. It’s the compassion, the love, the very open spirited mother, and woman that will move us forward in this new century. 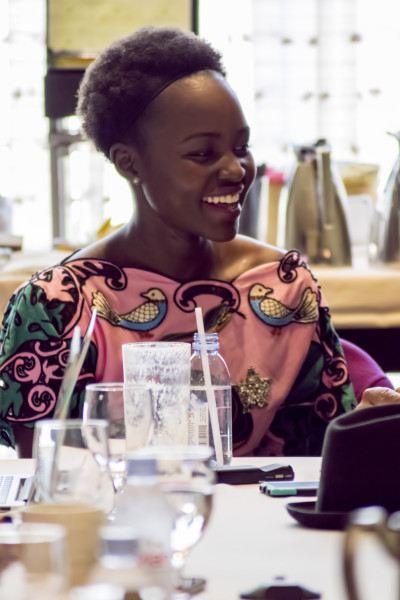 When asked what they'd like children to get from their parental roles, both had beautiful responses. Lupita's response was absolutely beautiful.

Well, I think what Mowgli is dealing with is finding belonging. And what Raksha offers him is home. Her… as home. And as an anchor. And I think that’s a really important thing for children to have. So that they can veer away from it, but always be able to come back when they need to.

Giancarlo's response was encouraging and inspirational!

The sense of trust that someone’s gonna adopt you and take care of you. That sense of really being engaged by the world. You know? Is what I would love people to take from this film. Because that’s our life! We think it’s all these other things until we get to a certain point some of us never get there, where we go, oh my gosh! Did I just miss it? You know? This is what life’s about! It’s not about all the other things we may think it’s about! And I think people are gonna feel it in this film. If anything, all the folks who’ve come and talked to us in press today, their hearts have been opened!

This movie is opening people’s hearts in this way, that… It’s doing its gig! And if it’s entertaining you as well, and you’re seeing all of this great story that’s an amalgam of all this technology and human challenges that came with it to put a human being in this film – It’s precious! This is the precious gem that we’re gonna take away. And I… I just… I love it!