A group of talented bloggers and I had the honor of interviewing the talented The Jungle Book Director, Jon Favreau, and the young actor who played Mowgli, Neel Sethi. The interviews went so well that I walked out feeling as if I just had a chat with a couple of friends. Being a live-action remake of a classic animated movie, Jon Favreau had his work cut out for him. Somehow he managed to cast actors that were seemingly born for their roles in The Jungle Book. Favreau brought each character to life so well that you the stigma of “talking animals” was lost and a deep connection to the characters was developed. Check out our Jon Favreau interview and Neel Sethi interview below. 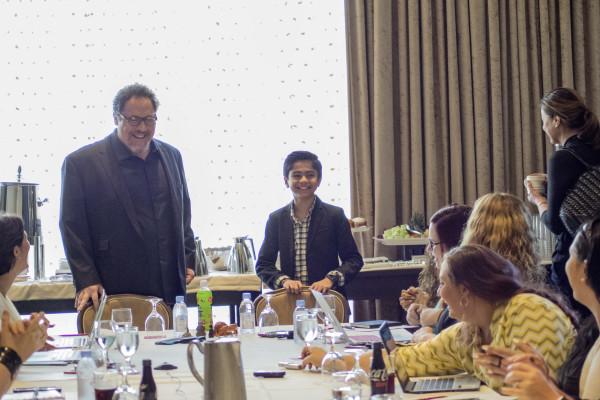 Jon Favreau and Neel Sethi walked into a room of bloggers with proud smiles on their faces. Maybe it was because we were cheering for them as they entered, but I think it's because they were like proud parents, ready to brag about the accomplishments of their new baby, The Jungle Book. Favreau was excited to explain his process of creating an Effects Movie that combined special effects and live action.

And so I met with Rob Legato, our Visual Effects Supervisor on The Jungle Book. Just a very experienced guy who really understood Visual Effects and what you could do with them. And I didn't really thing anything of it after that and then I got the call from Disney to come in. Alan Horn loves “Jungle Book.” He loved it as a kid. He loved the Novel, the stories, and this was gonna be the next one after the success that they had. And I didn't really understand, I knew the Animated Film, but didn't understand how they'd make a live action version of it. But as he discussed “Life of Pi” and he talked about the tone of that film and he talked about “Avatar”.

It got me thinking of how we could create our own complete environment and I could do something similar to what I was thinking about for “Magic Kingdom” which was You know, if Disney had a Castle this big, make the Castle that big, if the branches of trees in this Movie in real life were this big or a Panther is this big, make him as big as he was in the Cartoon. Make him bigger, play with scale. Always keep it photo real but you could give it a dream like quality so you see the whole thing through kid's eyes. And so it was their enthusiasm, and their commitment to doing this. And honestly, the confidence they had with the success of the other live action adaptations that made me realize that they were an enthusiastic partner. 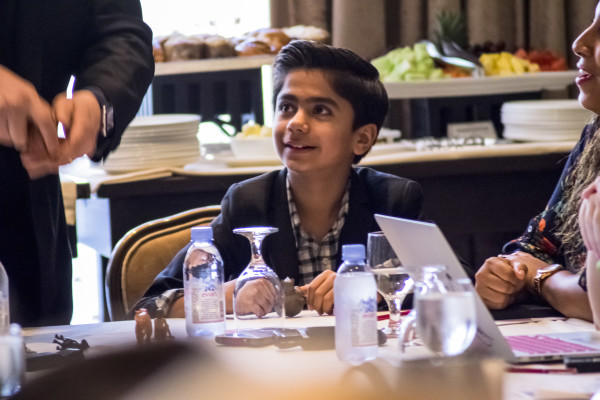 Favreau's love and appreciate for Neel Sethi is undeniable. He describes how there could not have been a better Mowgli and I have to say, I completely agree. Neel Sethi was basically born for this role.

I can't take credit for this talented young man. He wasn't experienced but he had a quality and being a Father, I recognized it – it was confidence! He was a full formed version of himself and so we kind of got who he was very quick. And, I think the fact that he wasn't a kid who was out there looking for acting jobs made it fun for him. It didn't feel like he was concerned about failing or concerned about getting the part or not. They came in on a whim. He saw a Flyer.

They auditioned and I was looking at 2,000 kids auditioning! He was a little younger than we thought.There was something that made me smile. And he started doing Martial Arts. After the audition was over, he says, “I do my own stunts”. And I was like, this kid's having a good time and I like that. and then I met with the family.  It was a big important part because it could be a disruptive experience, if you don't have a good support system around you. His Sister actually really sealed the deal. She was 16 and she turned out pretty well and actually prepared him for the audition. I was like if they raised this one, they're good Parents and as he grows up, they'll be able to handle that. And the whole family was there, you know, they'd be on the set. And the whole set became a family.

Um, they did a great job. He was an Athlete that also, you know, the Stunt Men, I had them put him through the paces, make sure he could keep up with all the strenuous activity and really sell that he's a kid that survived in this environment and it was just a weird combination of things that we were lucky enough to find this gift. 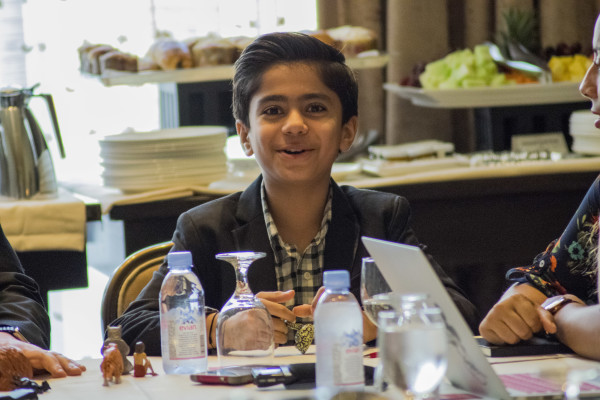 Favreau then asks Neel to tell about his experience with auditioning for the role and getting the part as Mowgli.

So I was in a Dance Class the Teacher for the Dance Class said I'd be very good for it and I never thought about acting before but I auditioned and they really liked me so we flew in LA! and then 2 weeks later, like we flew back to LA and we were in the totel, and the Producer called to tell us that I'd got the role and we were flipping and jumping! We were so happy. We went out and got my favorite food, Lobstery and Ravioli.

One of the questions that was in all of our minds was how Neel acted with animals and things that weren't actually there. I mean the animals in the film were CGI, but just like Mowgli does in The Jungle Book, Neel had a few “tricks” up his sleeve.

I just like made it natural like if this was a puppet, I'd tell myself that it's not a puppet – It's like a Bear or a Panther. I just did that in my head and said to myself, Oh, that's not a Puppet. That's Baloo. Hi Baloo. And the puppets sometimes they made them look like Baloo and that helped a lot! and Jon actually got into the puppet sometimes and that helped me interact with him. 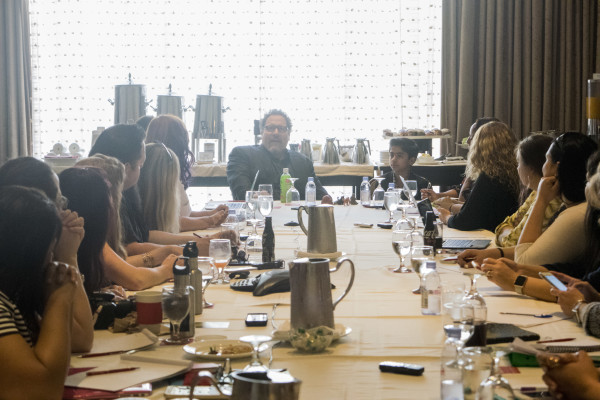 The musical score for The Jungle Book was very carefully selected. This is by no means a musical. Too much music or the wrong music could have really hurt the tone of The Jungle Book. Director, Jon Favreau describes his process in selecting the perfect score for the film.

I asked my wife and kids about the songs in the movie. One version we had a song and the next we took it out and she was like you're not gonna have that song in! And I'm like No, No, it might not fit tonally. And she's like, I think you should have the song. And the kids  wanted to hear the song.– And I started working on the “Bare Necessities” and then we worked in the one with Walken. But the trick of course is not to, if it's a Musical,  it breaks the tone and so it was John Gaffney, the Orchestration of the Music helped tie it in to the entire piece.

So right now is the fun part for me as all these choices that seem so precarious at times, how to work, balance the Music? How to balance the tone? How to balance the action and the humor and how to make that all work together. This is the part where it's fun cause you see where you knew or you didn't know.

Jon Favreau describes how he uses his family to gauge their reaction to parts of the film – to find out what works and what doesn't. It's truly a genius idea and quite thrilling to listen to him describe the process.

A great thrill for me is to show the kids and the whole family what we've been doing and then you get your first sense by looking in their eyes. And sometimes you show them versions that are almost done because you know their taste. I'm 49. I have 3 kids that are different ages. It's fun eeing how scary you could make it, seeing when they're scared but they like it, seeing when they're laughing. See the jokes that they get or don't get. What age will work? Can you make one for the 9 year old that that isn't boring to the 14 year old? And then of course, for my age as well. It's a really interesting sampling and then now too, I'm really excited because tonight the Cast, a lot of the Cast haven't seen it. Neil saw it for the first time. 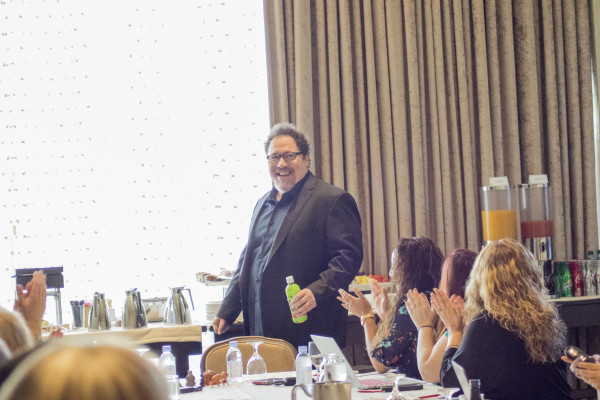 To end the interview, we asked Jon if he kept anything meaningful from the set of The Jungle Book. His answer made the room roar with laughter.

If you notice when he (Mowgli) goes into King Louie's Temple where King Louis is, I kept the cowbell – A little more Cowbell.

I hope you enjoyed our Jon Favreau Interview and our Neel Seth Interview!